Teaching everyone to be perfect and expects nothing more than perfection.

The Perfectionist (as she proclaims herself in that profession) is the final antagonist of the Cartoon Network TV series Courage the Cowardly Dog.

She was a somewhat proper old school teacher under the alias "The Teacher", who is complete neat freak obsessed with perfection.

The Perfectionist helps people be "perfect" through the use of lessons to help them achieve the status of being perfect. Courage was going through a day of not doing things right, so The Teacher came to the farmhouse (with Muriel and Eustace unaware of her presence) to strictly train Courage into becoming "perfect".

The Teacher had Courage enroll in various "perfection lessons" in order to improve anything about him that was not flawless. Such lessons were things such as Courage having to balance a heavy set of books on his head while going up the stairs to "walk perfectly", and to make the Eiffel Tower out of toothpicks so that he could prove he could "make something perfectly". All of these lessons ended with Courage failing the task, much to the Teacher's anger and frustration.

But the Teacher eventually met her downfall. When Courage went to the bathroom, he then met a friendly fish, who told him that that there is no such thing as true perfection, and that he could do anything, despite his imperfections. Realizing this, Courage returned to the Teacher. She informed him that if he fails his "final examination", everywhere he will go he would be known as being "imperfect". Courage's task was to draw a "perfect" number 6. After his time was up, Courage drew an odd picture and folded the paper and turned it upside down. The Teacher found a six on the paper. She then melted into the ground in rage, upset at Courage's success, saying what he did was not perfect, her voice becoming gargled and demonic as she melted and vanished into the ground, along with her blackboard shattering into dust-like pieces.

It's speculated that the Teacher melted because the whole time, she was a figment of Courage's mind. When Courage learned to finally accept himself, it destroyed his insecurities.

Not much is known about the Teacher, but what is known is that she is a schoolteacher who teaches her students how to be "perfect". This is evidenced by Di Lung's appearance in "Perfect", who had built a gigantic Eiffel Tower out of toothpicks, implying that she had taught him how to be "perfect", and that Di Lung apparently continued on with his life being "perfect". Other than that, there is no reference to The Teacher's younger days, which probably might lead to why she believes in perfection and why she teaches people how to be flawless.

It is possible that she is a manifestation of Courage's own doubts and insecurities that have troubled him the entire series. Although, it is also possible that she is a spirit of sorts who manifests wherever self-doubt and insecurities lay, as Di Lung had also been one of her students before Courage. Regardless, this would explain why only certain people can see her and are aware of her and why later she melts into nothing when Courage learns to finally accept himself. 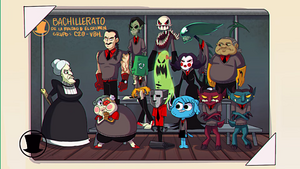 The Perfectionist's cameo in Villainous.