Freezing things with her powers.

Ruin the lives of other families as her own family had been ruined.

Maureen Connor, also known as Permafrost, is a Bang Baby with the power of cryokinesis and an antagonist in Static Shock.

She was voiced by Hynden Walch, who also voiced Blackfire in Teen Titans.

Maureen was a homeless child who grew up in a house with a sick mother and an uncaring stepfather. On Christmas Eve, her stepfather abandoned them both, slamming the front door as he left the house. The cold air that blew in, combined with the sudden and loud sound of the door slamming shut, caused her mother to collapse from lack of oxygen. She died shortly after. Maureen spent nights in the cold, and ran away from child services agents. She came to Reverend Anderson often for food, and lived in a cable car depot with other homeless people. When the Big Bang happened, she gained the power to control snow and ice, as well as immunity to the cold. Maureen named herself Permafrost, and decided to ruin the lives of other families in the same way her family was ruined.

Permafrost met Static for the third time at the Dakota Turnpike, where her powers gridlocked Christmas traffic, when he initially asked her if she had a name, and she replied, "The voices in the dark, they call me something... Permafrost." before turning to him with a rare smile. However, when he said she had to come with him now, she saw the Child Services agent in his place, and used her powers to bury him in an avalanche of snow. Static chased her down to a repair depot, where he saw that she made it her home. After finding a photograph of Permafrost's mother, he flew off with it to talk to Reverend Anderson about it. Permafrost carried a grudge against the superhero when she saw that Static flew off with what she viewed to be her most prized possession (as well as how she remembered her mother best).

Finally, she attacked the superhero at a tree lighting ceremony. Knowing about Permafrost from Anderson, Static warded off her assault, and after being hit with a snowball by her, he called her by her real name, Maureen, much to her initial surprise. He then explained that he found out from some people, people that cared about her. When she replied that nobody cared about her, Static said that he cared, and that he knew what she had gone through. When she asked him how he could relate to her, Static told Permafrost that he lost his mother too. Upon hearing that, Permafrost calmed down, and Static looked at the photo of her mother, while adding that he knew how hard it was, and how the pain of losing a loved one never goes away. He then handed the photo back to Permafrost, who took it while pulling down the hood of her coat.

When she was asked by Static if that was why she did what she did at the Mall and the power station, Permafrost replied that the families she saw, which were "all happy and warm in their homes" (as she put it), had no idea how it was for her out there, and then explains that when a person is homeless, others "look right through" them: "It's like you're not even there.".

When Static sadly agrees, saying that he's been guilty of that, Permafrost adds that she thought things would get better for her once she had the power to control ice and snow, but they didn't. She starts to cry, saying that she's more alone now than ever before falling to her knees. Static walks over to her and places a comforting hand on her shoulder. Sensing his comforting touch, Permafrost then turns around and hugs him. When he kneels to her level, she then throws her arms around him, still crying, and he returns the hug as snow begins to fall.

Permafrost was brought to Reverend Anderson by Static. The reverend offered her the Church's homeless program for help, which she accepted gladly. When she saw Static, she smiled at him and said her thanks, thus showing that she appreciated what he did for her. 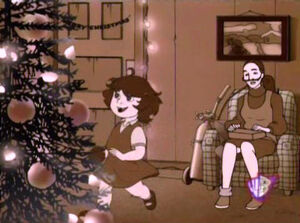 Maureen as a child with her sick mother. 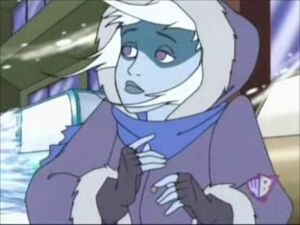 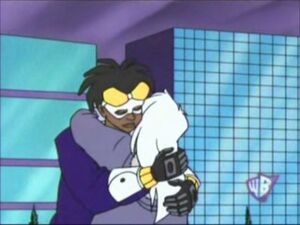 Permafrost accepting a hug from Static.
Add a photo to this gallery

Retrieved from "https://villains.fandom.com/wiki/Permafrost?oldid=4335876"
Community content is available under CC-BY-SA unless otherwise noted.