Regain her powers and destroy all who oppose her.

Transform the DC Multiverse into a self-sustaining weapon.

Cosmic Entity
Pereuta is a major antagonist in DC Comics and serves as the main antagonist of the Year of the Villain saga. Perpetua is a member of a god-like race called the Super Celestials and is the creator of the DC Multiverse before it was altered by her children.

Billions of years ago, A race known as the Super Celestials were tasked by the Judges of the Source to create new life within the Omnisverse. However, the one named Perpetua desired to eliminate the judges by using the seven hidden forces to make a multiverse she could use as an everlasting weapon. She then created her children Alpheus, Mobius and Mar Novu from the Overvoid to keep watch on the multiverses various realms. Five billion years later, Perpetua made human/martian hybrids called Apex Predators to inhabit the multiverse and serve as soldiers against the Judges of the Source. However, the judges were alerted of Perpetua's treachery by her children, and they sent the Cosmic Raptor to seal Perpetua and the Totality of her powers away inside the Source Wall that the raptor had created.

Perpetua was forced to watch as her children transformed the multiverse into a less savage state that was free of her Apex Predators until eons later, the Source Wall was shattered during the events of Dark Nights: Metal, allowing Perpetua to escape her imprisonment while her powers in its Totality was sent to Earth. 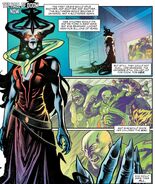 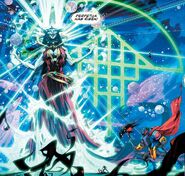