Perry is a minor antagonist in the American animated webseries RWBY. He is a Faunus member of the White Fang and seeks to subjugate or eradicate humanity.

He was voiced by Kyle Taylor in the English dub, and by Takayuki Miyamoto in the Japanese dub.

Perry is first seen in the Volume 2 episode "Painting the Town...", where he appears as a new recruit at the White Fang recruitment meeting. He watches as criminal Roman Torchwick and his bodyguard Neopolitan present new weapons and technology for the White Fang to use, before the meeting is interrupted by Blake Belladonna and Sun Wukong, and Roman gives chase.

Perry later appears patrolling the ruins of Mountain Glenn, where Doctor Bartholomew Oobleck and Team RWBY are on a mission. Some other guards are spotted by Ruby Rose and Zwei, but Ruby falls into the underground tunnels before she can alert her teacher or team. When Ruby lands, she is captured by Perry and another soldier, knocked unconscious, and taken to Roman Torchwick.

Torchwick is not too happy to see Ruby, and proceeds to beat her while mocking and interrogating her. Perry and other White Fang members watch the ordeal, and Torchwick even thanks Perry for delivering her to him, stating that "he really needed it", to which Perry gives him a thumbs-up.

However, Oobleck and the rest of Team RWBY arrive, and begin attacking the ruins. Roman asks Perry to go take care of it, but Perry stalls when he sees the size of the explosions. Ruby makes a run for it, and Perry, Roman, and the other soldiers fire at her with their guns. Ruby dodges, and Roman demands that everyone load up onto the train cars, which Perry does.

It is not known what became of Perry afterwards. He could have either been one of the soldiers taken out by Team RWBY on the train, killed by the train's crash, killed in the following battle in Vale, or survived and escaped. If he escaped, it is unknown if he went somewhere else or participated in the Battle of Beacon.

In his first appearance, Perry is seen as a dark-skinned man with dark brown hair and floppy, dog-like ears coming off of his head. He wears his glasses over his Grimm mask, as well as a white collared shirt and red tie.

Later, after officially joining the White Fang, he gets a White Fang uniform: a sleeveless white shirt with a black belt, black pants, and a black hood. He wears a larger, sharper mask with his glasses still on top, as well as black gloves and boots. The back of the shirt has the White Fang's red emblem on it.

Perry is shown to be grounded and usually very serious, as he does not smile often and obviously is out to destroy humanity. However, he does show a sadistic side when he grins as Ruby is beaten unconscious and captured, and stays to watch when Torchwick beats and interrogates her. He also seems to have good relations with Torchwick, as Torchwick refers to him by his first name and even thanks him for bringing Ruby to him. 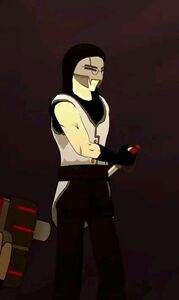 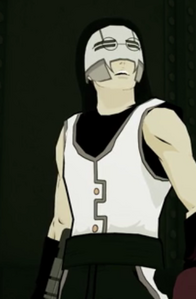 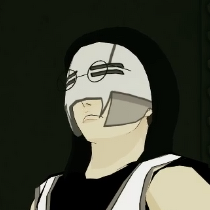 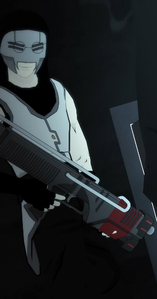 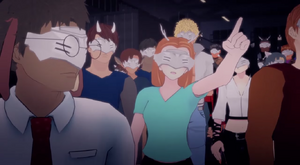