Perry is a villain from Teen Titans Go! and the main antagonist of the episode "Parasite". It has a huge resemblance to Cironielian Chrysalis Eater from the original series.

Starfire acquires a space parasite, when she's gathering food for Feast Day, a holiday. The team at first is frightened of the parasite growing on Starfire's stomach, but Cyborg, Raven, and Beast Boy warm up to it while it is telling a joke. Starfire discovers its name is Perry, and declares it can talk through her mind. Robin alone dislikes Perry, and during Feast Day, yells at Starfire to get rid of it.

Starfire is sad, and leaves to her room to cry. She wakes up to find Robin in a bio-hazard suit attempting to remove Perry. Starfire stops him, and Perry talks to him in his mind. He warms up to Perry and feels terrible. Perry decides it's time for it to leave, and pops off of Starfire on the roof. They all say their goodbyes, but Perry turns into an evil alien, processing by crushing the Teen Titans. 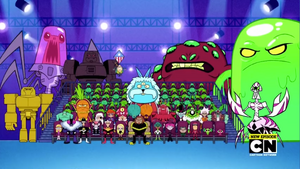 Perry in the audience of The Titans Show.
Add a photo to this gallery

Retrieved from "https://villains.fandom.com/wiki/Perry_(Teen_Titans_Go!)?oldid=3369742"
Community content is available under CC-BY-SA unless otherwise noted.