Villains Wiki
Register
Don't have an account?
Sign In
Advertisement
in: Mature, God Of War Villains, Leader,
and 28 more

Purge Greece of its gods and religions in the name of Persia.

Take over all of Greece.
Kill Kratos (all failed).

The nameless Persian King is the major antagonist in the videogame God of War: Chains of Olympus. He is the merciless ruler of the invading Persian Empire.

He was voiced by Fred Tatasciore, who also voiced Atlas in the same game, Poseidon in God of War (2005), Zeus in God of War: Ghost of Sparta, Saren Arterius in Mass Effect, CLU in TRON: Uprising and TRON: Evolution, and Tony Alpert in Battlefield: Hardline.

The Persian King sought to purge Greece of its gods with the use of his great armies and the Basilisk, putting him at odds with the gods of Olympus, who sent Kratos to deal with him.

The Persian King engaged Kratos in battle after mocking him and the Olympian gods. During the Boss Battle, the Persian King has three or four other Persian fighting Kratos. He uses his sword to deal some damage to Kratos and even sets it on fire. He'll even summon a power demon-like creature known as the Efreet. However when Kratos defeated him the Persian King quickly showed himself to be a coward at heart and begged repeatedly for his life - even offering Kratos his kingdom, his women and his gold.

But Kratos refused the King's offer and processed to kill the Persian King via crushing his skull with his own treasure chest.' After which, Kratos acquired the powers of the Efreet.

The Persian King has great physical strength due to his size. During his battle with Kratos, the king wields a gigantic sword, which he can also set in on fire, to make it deliver more damage, and defends himself with a large shield. [[File:]] The king also has the power to summon the Efreet, which is a giant flaming demon that smashes the ground and creates fire damage around it, but after his death, the power that was then taken by Kratos. 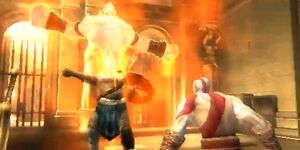 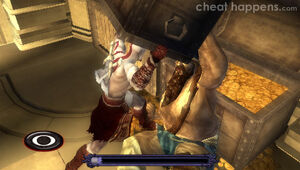