Get revenge on Sorbet and Gelato.

Kidnap Trish.
Help La Squadra overthrow the Boss and take over the drug trade (all failed).

Pesci is a minor antagonist in JoJo's Bizarre Adventure: Golden Wind. He is a greenhorn member of La Squadra Esecuzioni, along with his partner/mentor Prosciutto, who both infiltrate an express train to Florence while searching for Bucciarati and Trish. He is initially very timid, cowardly and weak-willed but after Prosciutto's downfall combined with his teachings, he manages to gain enough confidence to face Bruno head-on, becoming one of the more ruthless and dangerous members of La Squadra in the process. Pesci wields the Stand known as Beach Boy.

Pesci and the rest of La Squadra were initially rebelling against Diavolo in order to get a more active role within Passione's payroll, but after two of their elite members, Sorbet and Gelato, were brutally murdered as punishment, their leader Risotto Nero called off their attempted coup. After finding out about the Boss' daughter, Trish Una, La Squadra started rebelling again and aimed to kidnap her in order to blackmail the Boss.

Pesci and his senior member and mentor Prosciutto are first seen spying on Bruno Bucciarati in Napoli's train station. After boarding the train, Bruno and his team suddenly disappear from plain sight. Unbeknownst to both Prosciutto and Pesci, they entered Coco Jumbo's Stand, Mr. President, in order to travel without being seen. Pesci uses his Stand, Beach Boy, to detect a mysterious life form within the train's cockpit and discovers Coco Jumbo after reeling in the driver. Before managing to investigate the turtle, Pesci is suddenly shocked when Prosciutto decides to activate his Stand, The Grateful Dead, despite endangering the other passengers as well. Pesci then departs the cockpit and enters the bar wagon so that he can eat ice and drastically slow down his aging effect. Before going, he sets up a trap on the air conditioner button just to make sure.

When Mista exits Coco Jumbo and activates the air conditioner, Pesci detects him with Beach Boy and starts reeling him in. When Beach Boy's hook is about to enter Mista's brain, he shoots two of his Sex Pistols to search for the Stand user. After finding Pesci, they destroy his ice which makes Pesci panic and lose his composure. Prosciutto then saves Pesci from Mista and shoots him with his own pistol at point blank range, seemingly killing him. Pesci takes Prosciutto back to the cockpit but is unable to find Coco Jumbo. Prosciutto suddenly notices animal droppings under the driver's seat and finds Coco Jumbo hidden under the control panel. Before being able to send more aging effect within the turtle, Pesci notices that Bucciarati has gone missing.

Bucciarati then ambushes Prosciutto and engages in close-range combat with him. Prosciutto orders Pesci to go inside Coco Jumbo and kill the rest of Bucciarati's team for good but is suddenly knocked out by Bruno. After throwing both himself and Prosciutto off the train, Pesci attempts to save his partner with Beach Boy, but fails at doing so and sees his mentor crushed between the train wheels. Now dying, The Grateful Dead's aging effect is suddenly back to normal and Pesci is on the verge of tears, completely alone with a train full of his enemies. However, Prosciutto has enough determination to reactivate his Stand despite having broken nearly every bone in his body. Pesci takes Prosciutto's words and resilience to heart and gains enough confidence to face-off Bucciarati in order to finish his mission for good.

Being able to detect Bucciarati's heartbeat, Pesci phases Beach Boy's hook through Bucciarati's body and is about to rip his heart off. Bucciarati then dismembers himself into pieces with Sticky Fingers and stops his heartbeat for a while by zipping it in half. This enrages Pesci as he is no longer able to detect Bucciarati's exact location which prompts him to destroy the train's control panel and stop the train. Now facing Bucciarati in a final duel, Pesci, once again, phases the fishing line through Bucciarati's body and attaches the hook in his heart, knowing that Bucciarati would attempt to rush towards him. Bucciarati uses this in his advantage and wraps the fishing line around Pesci's head before brutally snapping his neck.

Pesci, adapting Prosciutto's sense of determination, is not through yet and manages to survive despite being fatally injured, suddenly entering Coco Jumbo and wrapping the fishing line around the necks of Bucciarati's team members who are still under the effect of The Grateful Dead's rapid aging. Before being able to kill them, Bucciarati sends his arm within Coco Jumbo with Sticky Fingers and pulls Pesci back outside. Pesci is then finished by Bucciarati who pummels him multiple times with Sticky Fingers, separating him into a fatal amount of zippered pieces. Prosciutto follows him soon after, losing his determination after seeing his partner die but not before calling Melone and informing him on their location.

Pesci's Beach Boy is a fishing rod capable of phasing through objects and humans. Adding to that, Beach Boy's line acts as a sensor which is capable of sensing life forms by heartbeat through vibration and weight. It is almost impossible to defend oneself against the Beach Boy since any damage inflicted on its line reflects it back at the victim. Beach Boy's ability to phase through humans makes it a very deadly Stand, as Pesci's preferred method of killing is to reel in his targets and rip their internal organs out with its fishing hook. After Pesci's newfound sense of determination and confidence combined with his Stand, he manages to become one of the more dangerous Stand users faced by Team Bucciarati. Even Bucciarati himself goes as far as to consider Pesci the more dangerous of the two, as his sudden resolve forced Bucciarati to use his Stand to its very limit. 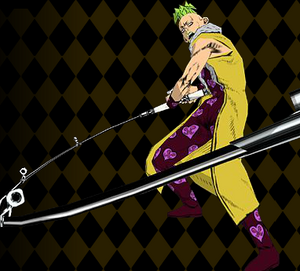 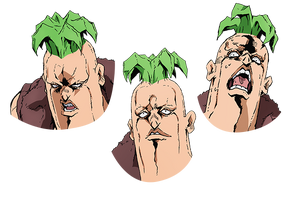 Pesci being attacked by Sticky Fingers. 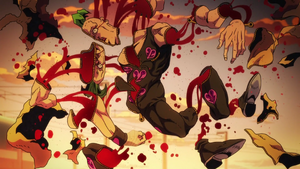 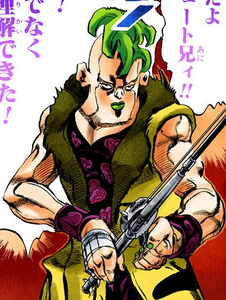 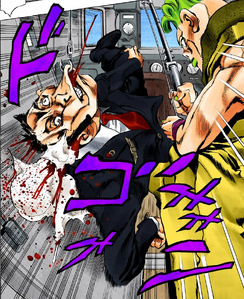 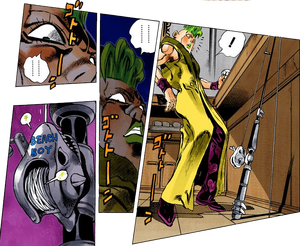 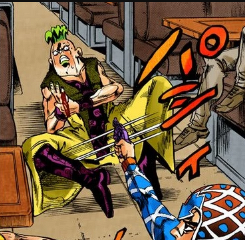 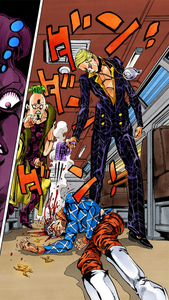 Pesci's despaired reaction to realizing Prosciutto being trapped under the train. 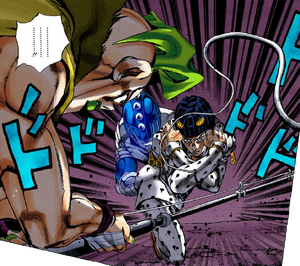 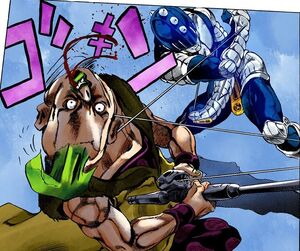 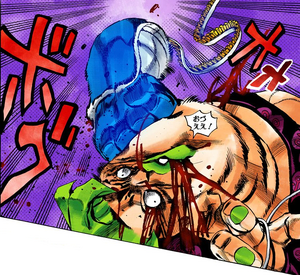 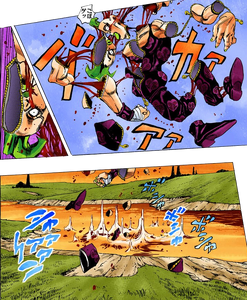 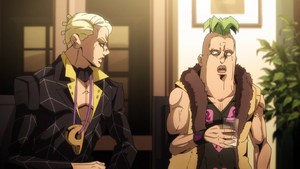 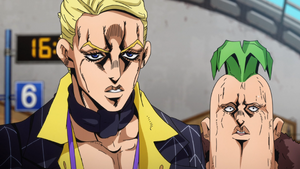 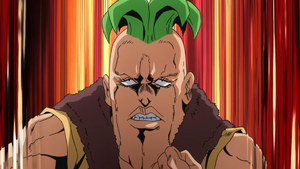 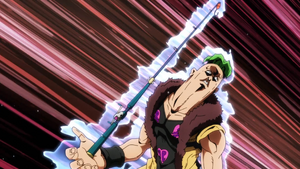 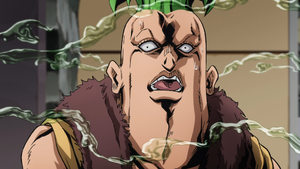 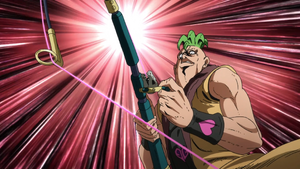 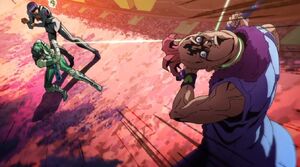 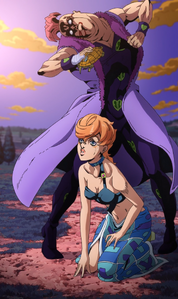 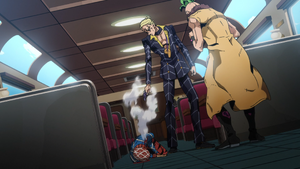 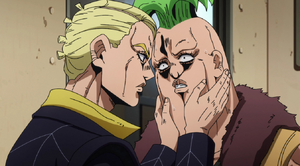 Retrieved from "https://villains.fandom.com/wiki/Pesci?oldid=4068345"
Community content is available under CC-BY-SA unless otherwise noted.