Killing anyone who trepasses or loiters around DIO's mansion.

Pet Shop is DIO's pet peregrine falcon and a minor antagonist in JoJo's Bizarre Adventure: Stardust Crusaders. His Stand, Horus, represents one of the nine Egyptian gods of the sky.

Pet Shop was once a pet falcon belong to an unknown man alongside Petsounds, although ownership of it shifted to DIO upon the man's death at the hands of him. DIO keeps this falcon as the sentinel of his mansion in Cairo. Pet Shop, as he was known, attacks anyone who approaches the mansion without warning. Iggy, a stray dog who was accompanying Jotaro and his group (against his will) accidentally finds the mansion, as he watches Pet Shop decapitating two dogs who were peeking in the gate of the mansion and drag the carcasses into the mansion's perimeter.

A beggar, hired by the group to find the mansion, also arrives at the place, only to be crushed under a gigantic icicle. Iggy then notices the falcon is a Stand user, deciding to leave the place since he didn't gave a damn about Dio. Acting as a mindless animal, Iggy manages to avoid Pet Shop's attention when the raptor redirects his focus on the canine. But as a boy tries entering the mansion to find his missing dogs, Iggy is forced to fight the bird in order to save the kid.

Iggy manages to run away to a sewer, but the dog was relentlessly chased by the bird. There, he make a decoy with his Stand and manages to hurt Pet Shop, but he simply freezes the wound to cure it and continue hunting down Iggy. He freezes the entire place and stops Iggy from running, forcing him to cut his own paw in order to flee the place.

They continue their deadly cat-and-mouse chase underwater, as Iggy deflects Pet Shop's icicles, hurting one of his wings. Pet Shop then freezes all the water around Iggy in an attempt to crush him. Iggy digs underwater tunnel to escape the mad raptor, only to find Pet Shop being one step ahead of the dog and lying in wait. Pet Shop summons Horus' cryokinetic power to get a straight shot at Iggy but Iggy, in an act of desperation, defeats the falcon by biting onto his beak, resulting the Pet Shop's cryokinetic power blowing up, killing the psychotic raptor. Due to his fight against Pet Shop, Iggy was heavily wounded and would be forced to fight against Dio and his men in a worst possible physical condition. During the battle against Vanilla Ice, further injuries inflicted by the villain in addition to worsened physical condition in his fight against Pet Shop, would cost Iggy his life.

Pet Shop appears as one of Heaven Ascension DIO's allies. He only appears in the sixth chapter, aiding Enrico Pucci to confront Jotaro and Jolyne. They, however, ended up defeated and quickly left the scene.

Pet Shop's Stand, Horus, allows him to create ice in the form of sharp icicles or even huge blocks. He can also freeze water or the air around him, and also cure his wounds. 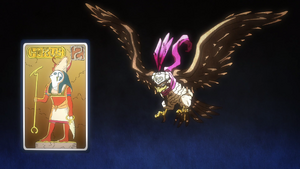 Pet Shop in the anime. 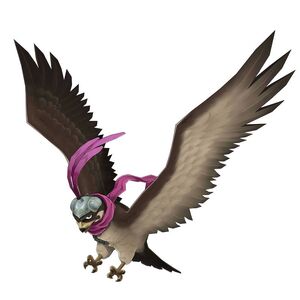 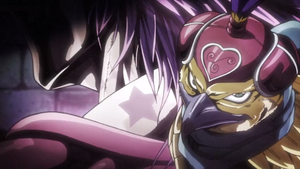 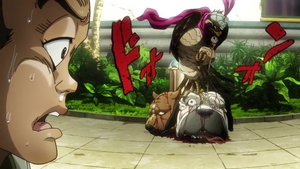 Pet Shop standing over the remains of Chibi and Buchi. 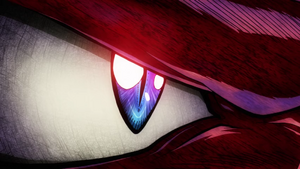 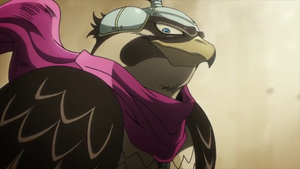 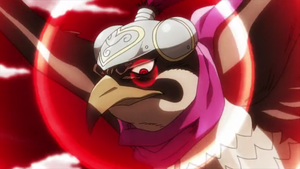 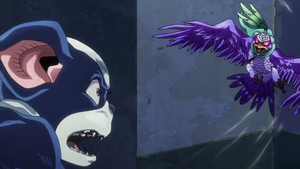 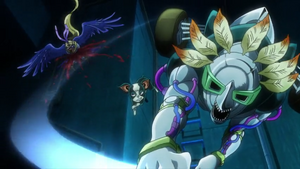 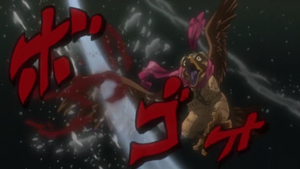 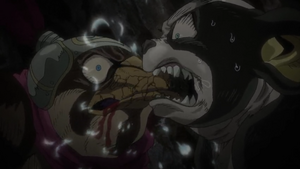 Pet Shop shortly before his demise. 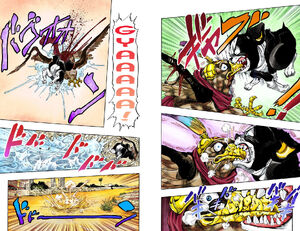