Pete (Shaun of the Dead)

Shaun of the Dead

Pete is the secondary antagonist in Shaun of the Dead. He is the flatmate of Shaun and Ed who becomes infected and turns into a vicious zombie.

He was portrayed by Peter Serafinowicz, who also played Darth Maul in Star Wars: Episode I - The Phantom Menace, Duane Benzie in Spaced, Darth Chef in South Park, George Spelvin in Archer, Goran the Mutilator in American Dad!, Forrest Blackwell in LEGO City Undercover, Blind Ivan in Gravity Falls, Johnny's Father in Sing, the Agency Director in Rick and Morty and Iofur Raknison in His Dark Materials.

Shaun and Pete first met in college and quickly became friends before eventually graduating and moving in together alongside Shaun's best friend Ed of whom Pete doesn't get along with. While putting up with Ed for a while and finding him occasionally funny he slowly grows more and more tired of him in spite of Shaun's best efforts to keep the peace between the two.

One morning Pete begins complaining to Shaun about Ed living in the flat and wishes for him to leave, Shaun convinces him otherwise however Pete is still heavily irritated by Ed and asks him to do the washing up before leaving for work. On his way home Pete was ambushed by several zombies and was bitten by one.

When Shaun and Ed come in drunk to their apartment at two in the morning and begin dancing and partying Pete comes stomping in, breaks the record, and yells at them both for disturbing his night. He tells them that he has work in four hours and it is Sunday, when they mistake it for Saturday.

The next morning, Pete is nowhere to be seen. Shaun and Ed look for him but fear going up to him because he might be a zombie and he might still be angry. Unfortunately, it turns out to be true, and a shocked Shaun sees a completely naked, zombie Pete in the shower, who moans and stumbles out to kill him when he sees him. Shaun tells Pete he is welcome to "join us" at the pub later.

In his final appearance Pete breaks into the Winchester pub, joining them, as the head of a zombie horde, but after biting Ed and abusing him once more, Shaun has enough and yells "I SAID LEAVE HIM ALONE!" He shoots Pete in the head with his gun, killing him. 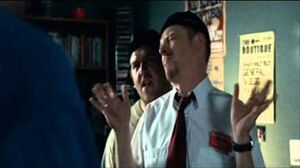 Shaun of the Dead - Electro