Pete Hicox, going under the alias Oswaldo Mobray, is a supporting antagonist of Quentin Tarantino's The Hateful Eight, the other two being Marco and Grouch Douglas. He is a member of Jody Domergue's gang, where he goes under the nickname English Pete Hicox, and traveled with him to save his sister Daisy Domergue. There is a bounty worth $15,000 on his head.

He was portrayed by Tim Roth, who also portrayed Archibald Cunningham in Rob Roy, General Thade in Planet of the Apes, Abomination in The Incredible Hulk and George Wallace in Selma.

Arrival at the cottage

He, alongside Marco, Douglas and Jody arrive at Minnie's Haberdashery, knowing that John Ruth, the bounty hunter who captured Daisy, will pass there on his way to Red Rock. They kill everyone inside, except General Sanford Smithers of whom they think that he would add to their cover. Jody persuades Smithers to keep his mouth shut, the gang members then drop the bodies into the well, clean the cottage up, hide a gun underneath a table and wait for Ruth to arrive.

When Ruth and Daisy, accompanied by Major Marquis Warren and Chris Mannix arrive at the cottage, Ruth wants to find out who the people are with whom he'll be jammed in during the upcoming blizzard. Despite his cruel and cunning nature, Hicox acts as a jovial and sympathetic person, trying to settle every dispute fair and peacefully.

He greets the newcomers at the Haberdashery and offers Ruth a cup of hot coffee. When Ruth, disliking the taste, spits it out Hicox states that the rest of the group didn't like the coffee either, they were just polite enough to say nothing. Seeing Daisy, he acts like he has never seen her before. He asks Ruth why Daisy is chained to his wrist, Ruth explains to him that she is a wanted fugitive.

Hicox then asks in a friendly manner whether Ruth can prove it, to make sure Ruth is not just kidnapping an innocent women. When presented with the writ, Hicox comments that the writ states dead of alive and asks why Ruth is not simply delivering Daisy's corpse. When Ruth responds that he wouldn't want to cheat the hangman, Hicox thanks Ruth and properly introduces himself as the hangman of Red Rock.

Hicox then invites Ruth and Daisy to the cottage's bar. There, he tells Ruth and Daisy about the difference between justice and frontier justice, the latter being morally ambiguous and often wrong due to it's impulsive and spontaneous nature. When Ruth, afraid that someone inside the cottage works with Daisy, demands the pistols of everyone present, Douglas refuses, however after a short skirmish with Ruth and Warren is forced to give them his gun. Ruth next walks to Hicox, who gives up his gun without making a scene, commenting the situation in a friendly manner.

When Warren, due to the many racist remarks of general Smithers and Mannix, goes for his gun after Smithers severely insults him, Hicox deescalates the situation, stating that he would definitely hang Warren if he had shot the unarmed general. This leads to Warren providing Smithers with a gun and provoking the general into attacking to kill him in self-defense. After Smithers' death, Hicox and other group members debate the legality of the 'self defense', but without any severe consequences.

While Warren killed the general, Douglas had poisoned the coffee while no one was watching. O.B. and Ruth both drink the coffee and die brutally, which leads to Warren round up the surviving guest at the cottage's wall to find out who poisoned the coffee and is working with Daisy. He knows Mannix to be innocent, as Mannix almost drank the coffee himself. After exposing and killing Marco, Warren turns to the two remaining men. To finally find out who their enemy is, Warren tells the men that he will pour the entire poisoned coffee down Daisy's throat if the culprit does not surrender. With no other choice left, Douglas admits that he poisoned the coffee. However, before he can be punished, Jody, who hid in the basement the entire time, shoots Warren directly in his testicles from below. Hicox uses the opportunity to draw a concealed gun from his coat and shoots Mannix, hitting him in the stomach. While Mannix falls backwards, he shoots Hicox, hitting him in the chest and gravely wounding him.

When Warren wakes up, he finds himself in a bed in the cottage. Mannix is next to him, aiming his weapons at Douglas, a dying Hicox, and Daisy. Mannix and Warren force Jody to get out of the basement and kill him. Daisy then tries to make a deal with Mannix, telling him that if he shoots Douglas he will be allowed to leave. Hicox confirms this, telling him that he has not yet done anything they can't forgive. He also tells Mannix that he can keep the body of Marco to later claim the bounty, as well as his own body as he does not expect to survive his fatal injuries. While trying to convince Mannix, Hicox is shot in his right leg by Warren and gradually dies from blood loss on the floor. 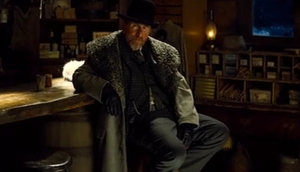 Hicox is fatally shot by Warren