Able to cause a long erection by yoga

Partying.
Taking interest in topiary art.
Bullying Mac and Kelly (after they broke their promise of never calling the police).
Playing beer pong.
Having sex.

Peter "Pete" Regazolli is the secondary antagonist of Neighbors and friend of Teddy Sanders who is a president of Delta Psi. He is unofficially the "second-in-command" to Teddy.

He was portrayed by Dave Franco, who also played Eric Molson in 21 Jump Street. Ironically, while Eric completely panicked over the thought of going to jail fearing that he will get sexually harassed, Pete wanted to sacrifice his whole career and status as a college student just so he could stay with Teddy.

Pete is a primary member of Delta Psi Beta, a fraternity dedicated to partying, playing music, drinking games, sex, drugs and alcohol. Pete also shows he has an ability to get an erection through yoga.

Delta Psi Beta starts to keep making noise that it frustrates the film's protagonists Mac and Kelly because of the fact they need to sleep for their jobs and they have a baby daughter, Stella. The first party, Mac and Kelly kindly come to Teddy to turn down the music, which Teddy agrees to do as then the two won't call the police on him. As Mac and Kelly go to return home, Teddy tells Pete that they should invite the two back into their party, which Pete disapproves as he feels the party's only for college students like them and not adults, specifically adults who have children now. Teddy invites back Mac and Kelly anyways, and the two agree to come in to the party.

As Teddy is successful at making sure Mac and Kelly fail at using the police to kill their music, Pete proudly supports Teddy in bullying Mac and Kelly. One of their acts of revenge against Mac and Kelly was cutting Mac's expensive topiary into the shape of a naked person mooning, which Pete brags that it's physically unable to get ripped off the ground.

Mac and Kelly convince Teddy to invite him to their next night party under the promise that they won't ask them to turn down the music (which Teddy refuses to as revenge for Officer Watkins showing up). Kelly then decides to frame Pete as being a traitor towards Teddy by getting him drunk enough to start making out with Teddy's girlfriend Brooke (who also Kelly forces to drink alcohol). Kelly keeps telling Pete and Brooke that they would make a lovely couple, which Pete keeps denying that he shouldn't. After more than a safe number of drinks, Brooke and Pete head out to bed to have sex. Mac and Teddy then have a dance off (to the song "Freaking Out" by Flo Rida) and Mac tries to finger point towards Pete and Brooke for Teddy to see, which Teddy only keeps thinking are just dance moves and not directional moves. Mac then jumps to the other side switching, and now Teddy finally sees Pete and Brooke climbing upstairs to go have sex.

Garf quickly alerts Pete and Brooke that Teddy saw them, which horrifies both Pete and Brooke that they both have been caught red-handed for relationship-cheating. Pete then goes to Teddy and asks if he likes the party, but Teddy surprisingly punches him out and Pete punches him back, then they grab each other's testicles, refusing to let go. Teddy then sees Pete's face freeze and asks why he's so calm, then it turns out Pete was pulling out his yoga-erection on Teddy which is why Pete's face froze to concentrate. Teddy then quickly lets go, flips out and screams at him to leave.

The next day, Pete goes to look for a job at the career fair in college, and Teddy decides that he got over Pete making out with Brooke and they exchange rhymes over and over. Later on, Teddy starts lamenting that he is now on probation unable to throw their End-of-the-Year Bash Party to get on the wall of fame for Delta Psi. Pete tries to tell him to just put himself on the wall because no one will stop him, but Teddy argues that he won't enjoy being on the wall without earning it. Teddy, irritated by Pete's speech that the wall shouldn't be important, starts getting angry again at Pete for making out with Brooke. Teddy then forces Pete to leave the Delta Psi house, and Pete does so while fighting with Assjuice who teased him on just walking out.

Later on, Pete arrives at the party which Mac and Kelly infiltrate and Kelly firing a firecracker at Officer Watkins got Delta Psi their third strike. With Watkins sending in additional police units, Pete decides that he'll have to go to jail. However, Teddy encourages him to stay out of legal trouble, which Pete cannot accept as this would mean he'll be distant from Teddy and they scream "I love you!" back and forth before Pete finally does run away as soon as he picks up many of his friends to also run away with him.

Pete has a tiny role in the sequel Neighbors 2: Sorority Rising, where it is revealed that Pete was gay (or bisexual) and had a boyfriend named Darren whom he is betrothed to. 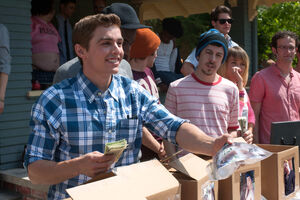 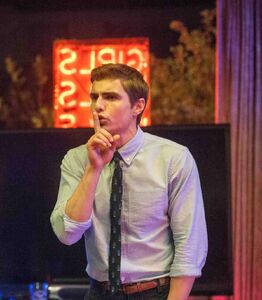 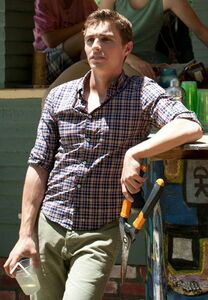 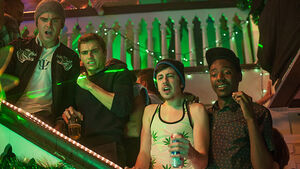 Retrieved from "https://villains.fandom.com/wiki/Pete_Regazolli?oldid=3544189"
Community content is available under CC-BY-SA unless otherwise noted.