Go to war with the Candy Kingdom.

Accused Criminal
Peter "Pete" Sassafras is a minor antagonist in Adventure Time. He appears in the episode "Candy Streets", then in another episode "Gumbaldia".

Finn and Jake were investigating Lumpy Space Princess' apartment to find out who robbed her they found a drop of red stuff, which they thought was blood. Pete Sassafras was mentioned by a Candy Drugstore clerk named Ann. She talked about how Pete had a nosebleed which made Finn and Jake suspect him. They head for the train station and spot Pete climbing aboard the 11:27 train.

Finn and Jake chase the train and catch Pete even though he claimed he was innocent. Finn and Jake then mock him in prison even having Jake shape shifts into a lawyer to fool him. Finn and Jake then leave the dungeons with Jake saying "Guilty" before closing the door. He somehow escaped after the events of the episode. As he is seen as a member of Uncle Gumbald's Legion of Candy Kingdom Haters who plan to go to war with the Candy Kingdom.

In "Come Along With Me", he witnesses the arrival of GOLB then runs away with the rest of Gumbald's army after Aunt Lolly asks for help to fight GOLB. 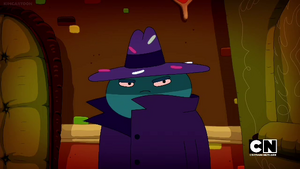 Retrieved from "https://villains.fandom.com/wiki/Pete_Sassafras?oldid=3460146"
Community content is available under CC-BY-SA unless otherwise noted.