Manipulation
Altering the course of reality
Awareness of the Fourth Wall

Torturing people for their own amusement, both mentally and physically.

Win the bet against their victims (succeeded)

Peter and Paul are the antagonists of the 1997 Austrian film, Funny Games and its 2007 American remake.

They are two young Sociopathic serial killers who use their charm and seemingly friendly demeanor to mislead their victims into letting them into their homes before taking them hostage and subjecting them to intense physical and psychological torture and finally killing them.

Peter and Paul are first seen with the Thompsons, the next door neighbors of Georg and anna Farber and their young son Georgie or Georg Jr and their dog rolfi. After some quick conversation, the Farbers note that the Thompsons are acting somewhat strangely. Paul and Fred Thompson assists Georg and his son, Georgie, in launching their boat. Fred claims that peter and paul are farmhands and that one of them possibly paul is the son of a friend of the Thompson's After Paul and Fred leave, Georgie notes that Fred was acting weird. Meanwhile, Anna is cooking in the kitchen when Peter comes knocking on the door and asks to borrow four eggs. Anna gives him the eggs, but Peter drops them, claiming that he is clumsy. He is apologetic, but Anna tells him that it is okay, and gives him some more eggs. During this time, Peter "accidentally" knocks Anna's cell phone into a sink filled with water, ruining it.

As he attempts to leave the house, the eggs break again, this time because the Farber's dog, Rolfi (Lucky in the 2007 version) supposedly tried to jump on him and he is afraid of dogs. Paul has also entered the Farber's house, and is apologizing for not coming to get the eggs himself, when he notices Georg's golf clubs. He picks one of them up and admires it, and then asks to try it out for himself. Anna allows this, and Paul takes one of Georg's golf balls and leaves to go and hit it into the bay. Meanwhile, Georg and Georgie are working on the boat when they hear their dog rolfi barking off-screen. They tell rolfi and to shut up, but it keeps barking. The dog then lets out a pained noise and becomes silent. Anna, meanwhile, goes outside to check on Paul, who gives her back the golf club and praises it. A frustrated Anna asks the men to leave, but they only seem to be confused as to what they have done to upset her. Despite this, they agree to leave as soon as they get the eggs. Anna refuses, and insists that they leave, but they continue to act confused and don't leave.

Georg then comes into the house and asks Anna if they'd seen the dog, him having gone to investigate after hearing the pained bark. As Georg gives Peter and Paul a chance to explain themselves, Anna angrily goes to the kitchen and gets the remaining eggs. Georg does not give the eggs to Peter and Paul, though, as he still does not know what is going on. Paul tells him that Peter asked for eggs, they broke, and now he would like some more, and asks Georg what is so difficult to understand. Georg says to Paul, "you'd better watch your tone with me, young man," to which Paul responds, "you'd better watch I don't smash your balls in. Georg slaps Paul in the face and again tells them both to leave before trying to push them out of the cottage. But in response paul angrily grabs one of Georg's golf clubs and hits him in the leg, breaking it stabilizing him for the rest of the film both 1997 and 2007 remake. Georgie comes in and attempts to defend his father, but Paul restrains him to the floor and repeatly punches him in the face with his fist. Anna comes to see what is going on, and Georgie runs to her. Peter and Paul offer advice for assisting Georg, such as getting him a chair. Peter attempts to look at Georg's wound, but Georg hits him away. Paul urges Georg to allow Peter to look at his leg, and says that he can help him with it. He suggests that they call an ambulance or the police, saying that neither he nor Peter will try to stop them. However, they cannot, because Peter had ruined Anna's cell phone earlier, and the house does not have a land line.

Paul then suggests playing a guessing game. He produces a golf ball from his pocket and invites the family to guess why he has it. Peter "guesses" that Paul has it because he did not hit it. Paul tells Peter that he is correct, and that something stopped him from hitting it, so he had to test the club in another way. The family realizes that Paul had beaten their dog to death with the golf club, and Anna finds his body in their car after Paul guides her to it in a game of hotter and colder as this happens as Anna gets closer to the car paul turns his head to the car smirks and breaks the 4th wall by winking directly at the camera implied the viewers at home acknowledging that he knows he is a character in a movie on a DVD that is playing on someone's DVD player. Meanwhile, Peter asks Georg or Georgie to go into the kitchen and get him something to eat, but tells them that if they bring back a knife or something that "[he'd] be sorry" for them. When a couple of neighbors call Anna down to the lake, she passes Paul off as a friend of the family. When asked where Georg is, Anna says that he pulled a muscle while putting up the boat and is resting, while glancing nervously at Paul. Later as night falls and the grand funny games are about to begin paul provides the possible backstory to both himself and peter he reveals that peter came from a poor family of 13 made up of a divorced and missing enstrangled father alcoholic prostitute mother and 10 brothers and sisters all of whom are drug addicts possibly heroin due to their violent crime and antisocial behavior paul then reveals that both him and peter are also drug addicts and they are planning on stealing the family's furniture and selling for more money to buy heroin and other drugs confessing this also briefly cause peter to briefly break down weeping implying their is some guilty consciousness in peter paul on the other hand doesn't even seem to give a damn for the next half and hour both peter and paul torture and bully the family with paul carrying out most of the sadistic acts of violence on the family including forcing Anna to strip before them and playing a game called kitten in the bag with georgie in which paul takes a pillow case from one cushion and pulls it tightly over georgie's head suffocating him to the point of painfully screaming paul lets go of him when georgie wets himself peter take him to change his underwear but is stopped by georg allowing georgie to escape briefly out the window through a river and eventually back into the house whole getting chased by peter

Peter and Paul both appear to be young men or 4 staged teenagers in their early twenties or late teens They both wear white golf shirts. Paul's shirt is long-sleeved, while Peter's is short-sleeved. Paul wears white shorts and shoes, and Peter wears black shorts and shoes. Both of them wear white gloves at all times. At one point, Paul claims that his are for eczema, though it is far more likely that both men wear them to avoid leaving fingerprints at the scenes of their crimes implying a form of theory that both of them pre meditate all of their crimes by creating a plan for every single one. Paul has neat blonde hair, while Peter has messy brown hair. 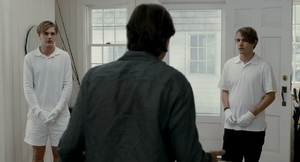 George asking Peter and Paul to leave.
Add a photo to this gallery
Retrieved from "https://villains.fandom.com/wiki/Peter_%26_Paul?oldid=4336498"
Community content is available under CC-BY-SA unless otherwise noted.