Villains Wiki
Register
Don't have an account?
Sign In
Advertisement
in: Articles under construction, Arrogant, Deceased,
and 20 more

Harassing Lt. Fred Williams and the rest of the police force.

Kill as many women as possible (partially succeeded).

Peter Bunch is the titular villain of Lucio Fulci's 1982 giallo film The New York Ripper. He works as a physicist conducting research at his home and he murders women when he goes out. He harasses his victims by talking in a high-pitched duck-like voice.

While playing fetch with his dog, an old man discovers a decomposing human hand in a bush. The victim is identified as Ann-Lynne, a local prostitute. Later, while being questioned by the Lt. Fred Williams, Ann's landlady Mrs. Weissburger says how she overheard Ann talking to a man with a strange duck-like voice.

Meanwhile, the ripper sets out to look for a new victim. He finds a young woman riding a bike. After following her onto a boat, he enters the car which the woman was vandalizing with lipstick at the moment and murders her by cutting her up with a knife.

After coming to the conclusion that the murder is linked to the one of Ann-Lynne, Lt. Fred Williams releases to the public that there is a serial killer on the loose in the city. That night, a woman named Jane Lodge goes out to see a live sex show where a man with two missing fingers on his right hand peeks interest in her. When the show ends, the female performer goes into the backstage to dress up but accidentally stands on some broken glass. While looking into a closet, she is attacked and killed by the ripper. The ripper then calls Lt. Williams and taunts him.

The next night, Fay, a young woman is riding home on a subway. When she sees the man with two missing fingers, he starts chasing her and she flees into a dark alleyway. After getting attacked by the man, she ends up in an empty strange looking movie theatre where she is attacked by a young looking man. That man turns out to be Peter, her boyfriend. He visits her in the hospital the next day and she tells him what she went through, but convinced that the man with missing fingers is the killer, she dismisses the part where Peter attacked her as some sort of a nightmare.

Sometime later, the man with two missing fingers picks up Jane to have sex with her in a hotel where the man ties her up. When the man falls asleep, Jane hears a radio report about the New York ripper, where the host describes that he has two missing fingers on an arm. Realizing what she got herself into, she quietly unties herself and flees the hotel room, only to be attacked by the killer who stabs her to death. Lt. Williams shortly after arrives at the crime scene where he discovers a tape recorder which belonged to Jane. Williams then discovers that the identity of the man is Mickey Scellenda, a Greek immigrant with a history of sexual assault and drug abuse. Dr. Davis, however, begins to doubt that Scellenda is the killer, saying how he has a lower IQ than the profile of the killer which he and the police established so he decides to visit Peter and Fay and ask them more about Fay's experience. This is where Dr. Davis arouses suspicion about Peter. That evening, Scellenda breaks into the house looking to kill Fay, but is rescued by Peter when he arrives home and Scellenda flees the scene.

After a few days, Lt Williams receives a taunting phone call by the ripper who wants to "dedicate a murder" to Williams. Believing that they located the ripper in a phone booth, the police flee to the location only to find a two way radio, tricking them into coming to the wrong location.

The ripper reveals that he is in fact at Kitty's house - a prostitute who Lt. Williams often visited. Afterwards, the ripper proceeds to brutally murder Kitty by inflicting multiple wounds on her with a shaving razor. Williams flees to Kitty's apartment but it's too late.

After a few days, the dead body of Scellenda is discovered, who apparently died by choking himself to death. He is eliminated as a suspect because he was dead 8 days before the murder of Kitty. Williams finally realizes that they have the wrong man and that Peter is actually the killer.

Peter was revealed to have killed women out of jealousy over their beauty his young daughter, who was missing her arm, couldn't have. In a climactic standoff, when Peter was about to kill Fay, struggling with her while swinging a knife and yammering in his disguised voice, Lt. Williams barges through the door and shoots Peter dead, the bullet ripping through both sides of his face and head.

Although seemingly harmless, polite, caring and intelligent at first, Peter has a dark secret: he stalks and murders sexually active women out of hatred towards them. His hatred comes from the fact that his daughter is dying from a rare illness and won't ever get to experience adulthood and life that his victims are living. 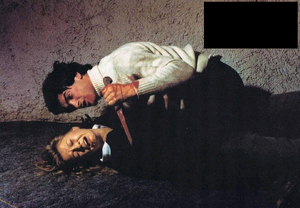 Peter attempting to kill his wife near the end of the movie.
Community content is available under CC-BY-SA unless otherwise noted.
Advertisement