Owner of the resort

Use his machine to steal the souls of his guests.

Stay young forever using the life energy of his victims.

Peter Kirlan the Third was the villain from the Are You Afraid of the Dark? episode "The Tale of the Captured Souls". He was the boy who ran the resort where Danielle and her family went on vacation. Peter's behavior is strange: his clothes are old-fashioned, he seems to be afraid to be photographed and lives all alone despite his supposedly young age. Also, mirrors cover the walls of every room of the resort. It's revealed that Peter uses the mirror to spy every room of the building and that his room can transform into a laboratory. Here he owns a machine that allows him to suck the life essence of his guests and stay young. One day, Danielle finds a graveyard with cutouts of a man, a woman, a child and even a dog, each featuring a series of ticks, indicating the amount of each one that are buried here. There is also a tombstone with Peter's name that states he was born in 1907, but it has no date of death. She assumes it can't be the same Peter who runs the resort. Meanwhile, her parents are quickly aging in a few days. Danielle then discovers Peter's secret lab and finally understands his evil plan. She confronts him in the graveyard, where she realize that he killed all the men, women, kids and dogs buried there to steal their souls, and Peter tries to convince her to join him and stay young forever, while her parents would have died, but instead she takes a picture of him with a camera and runs toward his laboratory. Here they confront one last time, and the girl manages to destroy Peter's machine. The boy regains his true appearance, that of an old man, while Danielle's parents recover their youth. The girl finally manages to convince them to leave the resort. Before she can go, the old Peter says her goodbye, and tells her she should enjoy her youth while she can, and that he’s going off to the graveyard to join his family, meaning he's going to die soon. While the family gets in the car, Danielle's mother finds a picture in which we see Peter in his true form. Danielle dismisses it as just a picture of a sad, old man. 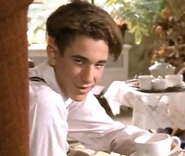 Peter as an old man
Add a photo to this gallery
Retrieved from "https://villains.fandom.com/wiki/Peter_Kirlan?oldid=3557741"
Community content is available under CC-BY-SA unless otherwise noted.