He was portrayed by Arliss Howard.

Peter Ludlow was the nephew of John Hammond in the movie, but unlike his uncle (who learns the error of his ways) Ludlow still admired his vision of Jurassic Park and wanted to revive his uncle's dream. However, he didn't exactly use the most humane methods in order to accomplish his goal. First of all, he wanted to resurrect the abandoned San Diego Facility, which his uncle had abandoned in favor of the more favorable Isla Nublar location. He sends a huge team to Isla Sorna to bring back a male Tyrannosaurus rex for his new tourist attraction in San Diego.

However, his plan backfires; the Tyrannosaurus eventually escapes from the ship's cargo hold and causes chaos in the city, resulting the deaths of the ship's crew, a citizen and a family dog, much to Ludlow's horror. Meanwhile, Ludlow is looking for the baby and finds it. However, just then the adult arrives. It attacks Ludlow and first picks him up in its jaws by the leg and crushes it. He screams in pain and can only watch as the baby T. rex lunges on top of him since the father decided to use it as the baby's first self-hunted meal. Then, after that, both the baby T. rex and the adult T. Rex are returned to Isla Sorna. 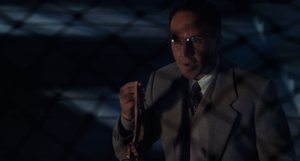 Peter's evil grin.
Add a photo to this gallery 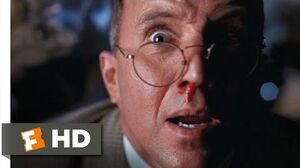 Retrieved from "https://villains.fandom.com/wiki/Peter_Ludlow?oldid=4322469"
Community content is available under CC-BY-SA unless otherwise noted.