Scheming against his own second cousin, Tim Murphy.

Bring dinosaurs to the mainland to cause death and destruction, frame his nephew for it, and ruin John Hammond's legacy (backfired).

Unlike his movie counterpart, this version of Ludlow survives the events of The Lost World: Jurassic Park, and teams up with Lewis Dodgson to get revenge for what was done to him. Under the fake alias of Mr. Would, he would help Tim Murphy build a new Jurassic Park, secretly trying to use it to fulfill his desire to end John Hammond's name and legacy.

Following the events of The Lost World: Jurassic Park, Ludlow barely survives being mauled by a T. rex by hiding away from the "hell-spawn" and then being saved by officers. After much therapy and dozens of surgeries, he's still crippled and has a heavily mutilated face, but is much better than before. Seeking to get revenge and ruin John Hammond's legacy, he teams up with Lewis Dodgson to hatch a plan; They will both support Tim Murphy, Hammond's grandchild/Ludlow's nephew, in building a Jurassic Park on the mainland (Ludlow with the fake alias of Mr. Would, having fooled the public into believing he was dead). Once the time comes, they will set the dinosaurs free to ravage cities and let countless people die. Along the way, he claims Hammond's cane during an online bid.

Ludlow is seen throughout the first three issues, although his identity remains hidden. During one of his appearances, he orders Dodgson to show Mr. Backer who's in charge by shocking him, which he agrees to, then taking the body to a cage where he will be safe so he could wake up. At the end of issue three, Ludlow finally reveals his true identity to Tim.

Throughout the fourth issue, as dinosaurs are slowly being released by Dodgson, Ludlow explains his plan and motivations, while mocking Tim that his sister Lex will die. All the while, he claims he never cared about his family and that he joined Hammond only for the profits he could gain. Tim manages to escape by knocking out his bodyguard, leaving Ludlow unable to do anything. In the next issue, he is eaten by a pack of Gracilisuchus, the same dinosaurs that killed Henry Wu on his orders. Ludlow's plan is ultimately stopped, although it's never revealed he survived being mauled (as no one believes Tim) and a Giganotosaurus comes incredibly close to charging inside of a nuclear power plant.

Peter is a pale-skinned man with brown hair and green eyes and dressed in a dark business suit.

He is shown with scars covering his body, specifically his face, and the fact that his legs were made useless by a large animal attack earlier also shows that he survived being fed to the baby T. rex. 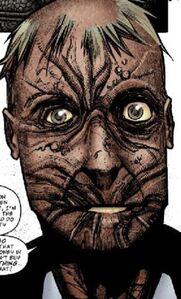