Founder and Leader of the Shadow Company
Drug Dealer

Sell heroin to his clients (failed).

He is a corrupt senior United States Army Special Forces General and the nefarious founder and leader of the Shadow Company. He is the boss of Jack Joshua.

He was portrayed by the late Mitchell Ryan, who also portrayed Dr. Terence Wynn in the Halloween franchise.

Peter McAllister and his second-in-command, Mr. Joshua, ran an international heroin business, along with the rest of Shadow Company. It is made up of ex-CIA members, Special Forces soldiers and professional mercenaries, all of which are trained killers. Thanks to the intimidation of Mr. Joshua, McAllister is able to keep his clients as well as his henchmen in check. When one of their men almost quits, McAllister orders the death of his daughter and then later him, for exposing their operation.

A Deal with Shadow Company

General McAllister was first seen in his hideout club waiting for Mr. Mendez to make a deal with him about the shipment of heroin. At first when Mendez tries to taunt him about his men and the whole set up, he taunts him back, and convinces him otherwise to cooperate with him in doing business with him. He demonstrates on how much business means to him and how serious he is about it, by asking him for his lighter and having his henchmen hold him still. He uses the lighter in burning Joshua's left arm, in showing how much Joshua could stand it, but it only disgusts and scares Mendez so badly. He asks him if he wishes to do business with him and make a purchase, and Mendez, knowing he couldn't take any chances of refusing, says yes. He warns Mendez to be ready to purchase and for there not to be any tricks, or to speak to Joshua.

Gen. McAllister contacts Joshua on his radio asking him if he killed Michael Hunsaker, to which the latter replies he did. However, he reported some bad news, saying Hunsaker spoke to the police about their operation. The General was disappointed, but told Joshua to come back to him immediately. Later, he manages to have Rianne Murtaugh kidnapped by Jushua and lure Roger Murtaugh over to him. He tells him he has a beautiful daughter and if he wishes to see her again that he must meet them at El Mirage Lake at sunrise so he can get her back. During the brief gunfight at El Mirage, General McAllister somehow secretly shows up pointing his machine gun at Martin Riggs, preventing him from killing Joshua. He reports back to Joshua, telling him he got Riggs, as the General made him walk all the way to their helicopter to imprison him, Roger, and Rianne.

Imprisoned in the Club

While Joshua questioned Riggs, McAllister asked Murtaugh, who was tied up to a chair, about the next shipment of heroin; his henchmen put salt in his bullet hole wound in another attempt to get him to talk. Getting nowhere with his questioning, he tells his men to bring over Rianne, who he hangs over a hook attached to a pipe. He even attempts to pull a move on her, but before he can do that, Riggs breaks free from his prison and throws Endo at one of his henchmen. McAllister escapes with one henchman as they head for the surface.

After escaping from the police, McAllister and his driver try to get away in their car filled with heroin and explosives. Just as they make their escape, Murtaugh stands in front of them and fires one round into the driver's forehead, killing him. McAllister tries to drive taking the wheel, but fails to and crashes into a bus, flipping the car upside down. As the car catches fire, McAllister is stuck and struggles to get out. He tries to grab his arsenal of explosives, but fails to reach it on time. McAllister is killed when the car explodes. 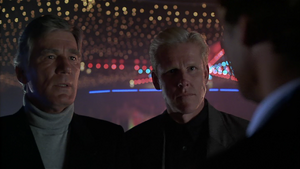 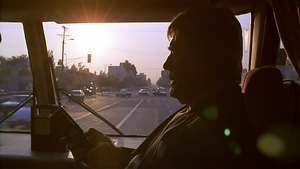 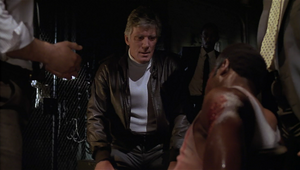 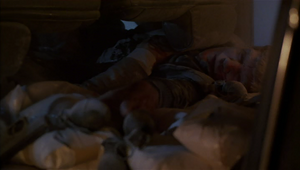 McAllister trapped inside his upturned car 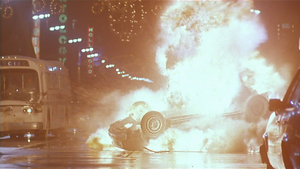 McAllister's car explodes with the general still inside