The Boy Who Will Never Grow Up

Taking children to NeverLand to join his Lost Boys.

People may think that they actually know the story behind Peter Pan, the Boy who Never Grew Up, and his adventures as told by the Scottish novelist J. M. Barrie. However, what people may not know is that Peter Pan had a darker personality than he does in future portrayals of the young boy, especially his counterpart in the Disney films.

Like his mainstream counterpart, this version of Peter Pan is usually described as an adventurous, brave and strong boy with a strong code of honor. However, he also has a darker side, as he can be cruel, merciless and even sadistic on occasion. Despite this, he does have times of remorse and has a strong honor code; the only person he truly disrespected and even tortured is Captain Hook.

In fact, more often the story makes it clear Peter is not evil or bad in nature, his acts and actions are simply a byproduct of his immaturity: being in Neverland prevents one from aging physically, meaning he cannot change. However, occasionally he shows signs suggesting he is aware of the tragedy of never growing up, such as when watching his departed friends from the window, he acknowledges the joys of having a family are one he will never be able to share.

In the original novels, Peter Pan had a careless, almost heartless attitude, which can partially be explained since he is just a boy. However, it is mentioned offhandedly that Peter had cut off Captain Hook's hand once, and fed it to a crocodile (thought the novel implies this is simply one part, albeit a major one, of their ongoing rivalry). There was also the statement from the author himself that whenever his crew of Lost Boys grew older, or there were too many of them, he would "thin them out."

This could be interpreted as either him killing the boys when they got older, or simply exiling them to places unknown. However, this is only mentioned in the books themselves, not in the film adaptations. He can also get downright nasty or cocky, which may or may not be slightly better in the adaptations of the novels.

However the stories also make it very clear he got a very complicated personality, Peter has a very strong sense of honor and refuses to ever break his word, even when it would be more beneficial for him to. He also has a high level of childhood naiveté, as he's unable to grasp the idea that people might not follow his standards of honor.

Although arrogant and spiteful at times, Peter is mostly cheerful and nice to others, generally turning nasty only when things happen that upset him. Peter regularly joins and leads the Lost Boys in battle, despite them only being children. It's mentioned that on occasions where he feels they have too much of an advantage, he will join in with the opposing team. However neither he, nor any of them seem to grasp the concept of death, as they see battles as just one big game. The only he truly grasps the horrors of death is when Tinkerbell nearly dies, and he becomes shocked.

He comes close to actually dying, is when thinking he was going to drown on Skull Rock, and rather than seeing it as a tragedy, Peter seems to partially look forward to it, as he says that "to die would be an awfully great adventure." 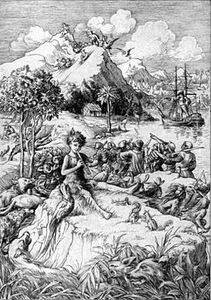 The Boy Who Will Never Grow Up.