Attempting to kill O'Hara.
Injecting himself with anti-aging serum.

Fix the entire timeline so his own loved ones will never die and to kill Miguel O'Hara (all failed).

Peter Parker (formerly known as Spider-Man) is from an alternate timeline and the main antagonist of Spider-Man: Edge of Time. He is the alternative future version of Peter Parker/Spider-Man who turns out to be the CEO of Alchemax. He is intent on fixing the timeline so no one he loved will ever die and destroying the new 2099 Spider-Man; Miguel O'Hara.

He is voiced by Josh Keaton, who also voiced his younger counterpart.

Peter Parker's life started out the same way as it usually does: getting bitten by a radioactive spider, losing Uncle Ben, and becoming a superhero. However, upon losing everyone else he loved, he became convinced that he was never powerful enough to save anyone. He then gave up being a crime-fighter and eventually became the CEO of Alchemax. The anti-aging technology has allowed him to live longer than normally expected. Guilt-ridden over the loss of his loved ones, he was presumably working behind the scenes and capitalized on Walker Sloan's time gate technology and his trip into the past.

With the respective time periods of Miguel O'Hara and Peter Parker in flux, the Peter of 2099 planned to absorb the resulting energy to gain complete control over time and rewrite the reality in his image, bringing all those he cared about back from the dead. He battled Miguel O'Hara using an Iron Spider suit, but was quickly incapacitated by the combined efforts of Miguel and the loose tentacles of Atrocity stuck in the timestream. Peter is eventually defeated by Miguel and is presumably erased from history after his past-self saw the monster he would become.

Peter Parker was selfless once and dedicated his life as a young man to using his enhanced gifts to become a hero that helped and saved countless lives. Over the years, the amounted guilt of his inability to protect those he loved and the civilians who died because his failures drove him mad with guilt to the point of insanity and megalomania. Although keeping his beguile humor and wit, Parker displays little of the morals he did earlier as he only wished to rectify him of this guilt by saving those he could not, uncaring if the entire universe would collapse on itself as long as he could achieve this.

Believing himself more deserving of this than anyone on account of his previous heroic actions and what he sacrificed, the universe somehow owed him this and refused to class himself as a villain as all he wanted to do was to save lives. Moreover, Parker became deeply arrogant after settling into the CEO of Alchemax, claiming that Miguel O'Hara was a pretender to his name and went further to deride O'Hara by claiming he was the true villain for stopping his potentially-cataclysmic plan. Unfortunately, after becoming CEO, Parker was slowed down by his age and had to rely on the Iron Spider Suit to keep with the younger Miguel during their final fight at the Gateway. 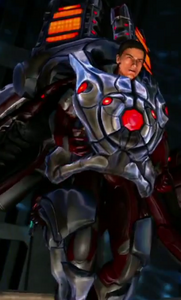