Leader of the Neo-Nazis

Torment Andrew Norris in as many ways as he can imagine (succeeded).

Rule the school.
Get Arthur killed as revenge for supposedly snitching about his illegal activities.
Kill Andrew Norris and his wife (all failed).

Peter Stegman is the main antagonist of the 1982 Canadian-American thriller film Class of 1984.

He is a teenage high school thug who rules over his own gang of neo-Nazi hooligans who also supply drugs and prostitution services to students as well as extortion rackets. He is feared by all the kids and staff due to his ruthless and unhinged nature.

He was portrayed by Timothy Van Patten.

When a new teacher by the name of Andrew Norris tries to break up the violence (and by default end Peter's rule over the school), Stegman and his gang instigate a vicious war that increases in intensity - starting with threats but soon turning nasty when Stegman and his gang stab a fellow student, then proceed to slaughter and kill the rabbits belonging to a teacher who was friends with his "enemy". The senseless deaths of the animals drove the teacher insane and he tried to kill Stegman and his thugs, only to die himself in the crash.

Stegman then successfully got Andrew suspended when he inflicted injuries on himself and framed the teacher for assault during a confrontation. He then got their friend Vinnie to stab Arthur when they started a lunch riot, which resulted in the former being arrested and held in juvenile detention while the latter was taken to the hospital. However, Stegman and his gang would cross the line when they broke into the Andrew's home and raped his wife, before kidnapping her and leaving behind photographs to taunt him.

Enraged and seeing no other means to stop the violence Andrew went to the school and engaged in a vigilante battle with the gang, killing many of the members . He would confront Stegman on the roof and the two wrestled, with Stegman almost falling through the roof.

At this point Stegman pleaded with Andrew, stating he was "just a kid" - this caused Andrew to pause and attempt to reach over to Stegman, who then tried to swipe him with his switchblade in a final act of malice: Andrew punched him in the eye costing Stegman his life as he fell through the ceiling and was hung by gym ropes over the school gymnasium.

Peter is a totally violent, sadistic, ruthless and mentally unstable teenager. He will hurt anyone who he thinks is threatening his authority over the school, or he will also kill them with no remorse or regrets. He is also racist towards African American kids at his school and he and his gang have a conflict with an African-American gang. His mother doesn't know of his real nature and thinks he is a real sweet kid. His father is briefly mentioned as being dead, but no further details on this are provided. Given Stegman's nature, it is entirely possible that he killed his father, either because he was not allowed to do something, because his father was aware of Stegman's true nature or quite possibly, both. He might be mentally unstable as he has intense violence and antisocial behavior. Later on in the movie we see that he is really pure evil by raping Andrew Norris' wife and slaughtering one of his teachers rabbits, making the teacher lose his sanity as a result.

Overall, Stegman is one of the most infamous villains for a reason. So much so that many people consider him to be the evilest teenage villain in fictional history.

Stegman has blond hair, and is usually shown wearing punk clothing that points out to his sinister nature, at the end of the movie, he wears red lipstick across his face, which he and his gang called "war paint" 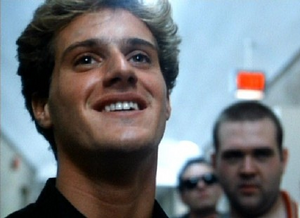 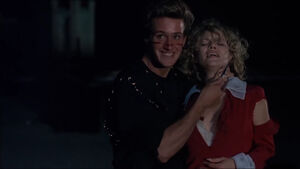 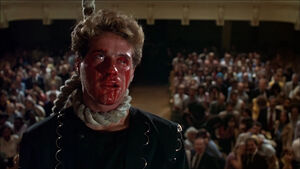 Stegman lifelessly hangs over the gymnasium. 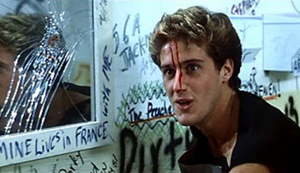 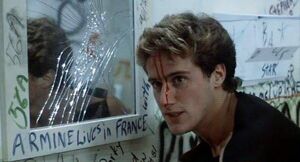