Member of the Nazi Party

Create an unstoppable zombie army for the Nazi regime.
Eliminate anybody and anything that threatens his work.
Kill the Raven team (all failed).

Dr. Peter Straub is the main antagonist of the Nazi Zombies mode of the 2017 video game Call of Duty: WWII. He was the creator of the undead, creating and augmenting this new army with the use of a special energy, called Geiskraft.

Born in Wiesbaden in 1892, Peter Glücksbringer Straub was the only child of a wealthy merchant. A reclusive child, at age 9, he was reported missing from the Straub Estate for three days, only to be discovered in the family mausoleum covered in self-inflicted cuts and scratches. This information was hidden to avoid it hindering young Peter’s promising academic career; the local school deemed him a prodigy.

Straub rose through academic circles to become a celebrated student at the universities of Bonn, Munich, and Berlin between 1911 and 1915. In the subsequent year, he served as a soldier during World War 1, and was severely wounded during a firefight in the Carpathians.

Rise of the Nazi Party

Returning home with honors, he dove into his medical studies and found himself working closely with those who would go on to found the Nazi Party. He proposed the idea of the Ahnenerbe and signed the founding documents for the organization on July 1, 1935.

With his unquestioning loyalty and innovative theories surrounding the rise and triumph of the Aryan race, Straub quickly became the academic pillar of this shadowy branch of the Nazi Order. Straub built a reputation for being both creative and merciless, willing to subject anyone around him to experiments and cruelties if it might advance his agenda – an agenda which he sees as aligned with the Nazi Party’s.

Straub's fascination with pain is more than merely academic. Observers have noticed that he has a tendency to scratch at his neck, revealing what appears to be a complicated... and mathematically deliberate... network of scars.

During World War II, Doctor Straub was contacted by Führer Adolf Hitler, who requested him and his staff to create a type of soldier that does not rest, fear or shy away from the shadow of death.

While this happened, Klaus Fischer, an aspiring scientist, informed the Ahnenerbe of the discovery of the hilt of the legendary sword that once belonged to holy Emperor Frederick Barbarossa within the mining town of Mittelburg. When the Ahnenerbe was unable to remove the hilt from its resting place, they requested Straub and his men, along with Heinz Richter, a weapon expert in the Wehrmacht, to come to the town to investigate, discovering the hilt is protected by a magnetic force. Upon arriving, he immediately had the entire town put on lockdown.

Despite the hilt being protected by the mysterious magnetic force, Straub and his men were able to siphon vast amounts of energy from the hilt. During an early experiment to draw power from the hilt, a cable overheated and snapped, striking two guards and instantly killing them. However, they soon began to violently twitch and reanimate before getting up and walking towards Straub with the intention of killing him. However, more guards arrived and put the two down. With this incident, Straub soon discovered the key to completing his task, as well as a vision of the Führer's future.

Dubbing the new form of energy obtained from the hilt 'Geistkraft', he discovered that it can be conducted through the human nervous system, which activates the most primitive parts of the human cerebellum. This energy is what 'preserves' the undead, as well as drive them. Straub also discovers that by triggering the pain receptors of the corpses, he can augment the zombie's strength and speed.

While this happened, Klaus attempted to prove himself to Straub by presenting his earlier works with his old mentor Lenard to him, only to be met with imprudence from Straub, who claims his works were "poorly documented" and "amateur". Straub also talked of Klaus' and Marie's father, Heinz, and ridiculed him for his shift from weapon design to toy making. Straub would also later to begin having conflicts with Richter after the latter discovered the possibilities of various weapon designs with the use of the Geistkraft energy. During this time of conflict, Klaus, now aware of Straub's true intentions and his ever growing conflict with Richter, found this opportunity to sabotage Straub's work.

Eventually, Straub learned of a secret cabel dedicated of keeping the history of the sword a secret after stumbling onto Klaus' work. He then began to bring artwork into the bunker to find a way to break the seal on the hilt. After learning that Klaus has betrayed him by making contact with the Allies, Straub manages to catch him as he prepared to sabotage his most powerful weapon, the Panzermörder, fusing Klaus with the beast as punishment for his actions before going into hiding. When the M.F.A.A. arrived, Straub would go over the intercom system around the town and either taunt the four or explain some of their work they were doing at the facility. He would sometimes go close enough to see the actions of the team with his own eyes, safe from any harm thanks to a modified Geistchild enhancement deflecting any form of projectile. Following the death of the Panzermörder and the extraction of the MFAA team, Straub destroyed Mittelburg and erased it from history.

A few days later, intel given to the MFAA suggests that Straub has relocated to Heligoland, an island just north of Nazi Germany. At the island, it is revealed that it serves as a place for Straub to store his "children", to which he has been doing for years. Here, he had placed several Corpse Gates around the island, acting as special doors that he could access with his recently-acquired head of Richter.

Rideau's team traveled to the island with the U.S. Army Rangers, but ended up landing on the shores alone. The team eventually discovered a ritual of the goddess Nerthus, and retrieved the pommel of Barbarossa's sword. They rebuilt the local radio and called in the Royal Air Force to bomb the island possibly at the cost of their lives. Straub escaped with his army by Zeppelins and headed to Berlin for a secret mission.

In Berlin, Straub worked in a lab within the command zeppelin of the fleet, the same zeppelin the four MFAA agents stowed away on. After the four recover the blade of Barbarossa's sword from the war-torn city of Berlin below, the agents re-board the zeppelin, much to Straub's shock upon realizing it was the same agents that interfered with his work in Mittelburg and Heligoland. After the four agents re-route some of the power in the zeppelin to open Straub's lab, the zombies Straub was working on in the lab broke free, ironically cornering and slaughtering Straub to death as the four MFAA agents watch on.

During the Bureau of Archaic Technologies' quest to reforge the Sword of Barbarossa, they encounter several apparitions of Straub while recovering the pommel. Following the apparition of Straub's death, Straub gets up and walks away while laughing manically, hinting that Straub could still be alive in some capacity. 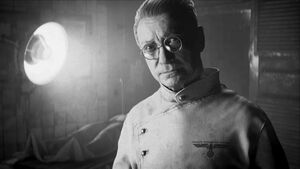 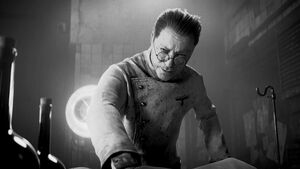 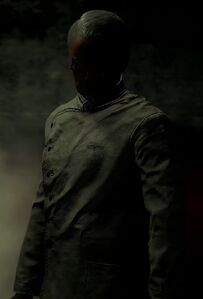 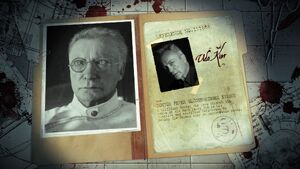 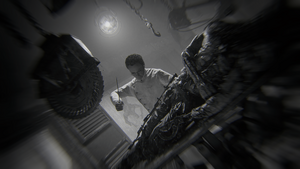 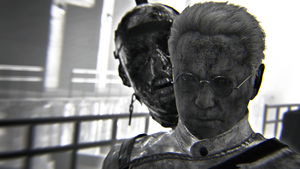