Founder and CEO of Weyland-Yutani Corporation

Find immortality for himself and use his company to create a new world for humanity (failed).

Peter Weyland is one of the two overarching antagonists (along with David 8) of the Alien film franchise. He is a billionaire, scientist, inventor and business magnate who is actually the founder and CEO of Weyland-Yutani Corporation, and the creator and developer of David 8, the other overarching antagonist of the entire franchise and of the entire synthetics. He seeks to gain immortality at any cost, even if it means committing murder.

He was portrayed by Guy Pearce, who also portrayed Fernand Mondego in The Count of Monte Cristo , Aldrich Killian in Iron Man 3, Kendall Duncan in Bedtime Stories, Leonard Shelby in Memento, Charlie Rakes in Lawless, and Dr. Emil Harting in Bloodshot.

Peter Weyland was born on October 1, 1990 at Mumbai, India to his mother which was an Oxford-educated Professor of Comparative Mythology, and his father, a self-taught engineer. In 2004, right on the age of 14, he was granted a Method Patent for a synthetic trachea constructed entirely of synthetically-engineered stem cells, becoming his twelfth registered patent to date. Anout 8 years later, on October 11, 2012, he founded the science company Weyland-Yutani Corporation.

Role in the films of Alien

Peter Weyland is first shown in Prometheus through a recorded video claiming by the time the crew sees the message he will already be dead but that he has a plan to help change the world by finding humanity's creators and hopefully form a bond by learning from them and advancing as a species. Unknown to the majority of the crew, Weyland only seeks to find the creators in hopes that with their technology he can obtain immortality and has put himself in a stasis machine that allows him to communicate with his creation; David 8. When it is discovered Weyland is alive and aboard the ship it is clear Weyland doesn't seem to mind part of the crew has died and he was the one who put them in danger. Weyland is then informed that they have arrived and are now prepared to awaken the last living Engineer at the alien base. In spite of Elizabeth Shaw who is a member of Prometheus crew and having discovered that the Engineer is not the benevolent creator everyone thought he was, attempted to advise Weyland against awakening the humanoid alien. Weyland, who was already dying with nothing to lose, proceeded to awaken the Engineer. Once they awaken the Engineer, Weyland has David inform the Engineer that they have come to have him help grant Weyland immortality. Furious, the Engineer mortally wounds Weyland after severely wounding David by ripping his head off. Realizing his dreams for immortality have been denied and he is moments from dying, Weyland succumbs to his despair and only can muster his final words to David: "There's... nothing..." after which he dies.

Weyland is an extremely egotistical, arrogant and selfish individual in the meaning of the word. He does not recognize in the true value of others, so that is why he sends teams of scientists from his company to life-risking missions to prolong his own life. Over the years, Weyland attempted to find immortality, which is his only true goal; to find immortality for only himself. Yet, Weylan despite his ego also seemingly wishes to use Weyland Corp to create a new world for humanity. 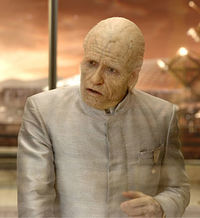