Senior Member of the Russian Mafia

Petrov(Russian: Петров), also known as the Sauna Gangster, is a minor antagonist in the indie top-down shooter videogame Hotline Miami 2: Wrong Number. A veteran member of the Russian Mafia, he is one of the few Russian mobsters serving the Mafia in 1989 to survive the events of the first game. He serves as the secondary antagonist of Jake's storyline and a minor antagonist in Evan's storyline.

While outside of his sauna, Petrov looks identical to the rest of the Russian mobsters seen in the series, wearing a white suit with a cyan shirt underneath his jacket. Despite this, he is still given a unique facial sprite. He is a bald man with magenta eyes, thick red eyebrows and prominent red mutton chops, which are visible when he is relaxing in his sauna.

Throughout 1989, the Russian Mafia face difficulties against the masked killers that have been coerced by 50 Blessings into relentlessly attacking their operations. In retaliation, some masked killers were either killed by the Mafia or captured and tortured for information. Petrov is one of the mobsters who was in charge of dealing out torture sessions with the more unlucky killers.

On June 3rd, one of the masked killers named Jake targets a meth operation Northwest 27th Avenue. Although he deals a heavy blow to the meth operation, potentially destroying the labs and killing almost every mobster there, he is mortally wounded once he reaches the third floor by one of the gangsters in the building. Jake is then dragged out of the building and taken to Petrov ready for interrogation at Downtown Relaxation, Petrov's personal bathhouse. Even through lengthy interrogation, Petrov is unable to get any substantial information from Jake, while his henchman concludes that Jake will not talk. Petrov points his gun at Jake and aggressively asks him if he has any last words before he dies. Jake only responds by spitting at the two mobsters before Petrov shoots him in the head. Shortly afterwards, Jacket, another masked killer, attacks the bathhouse and kills almost every mobster there. Despite this, Petrov manages to survive the attack either by leaving before the massacre or surviving from his wounds from Jacket.

Although heavily weakened by the masked killings, the Russian Mafia continues to exist by 1991, with Petrov owning a casino with a built-in sauna house just for him. After getting leads from Manny Pardo, freelance writer Evan Wright arrives at the casino seeking information to help in writing his book about the masked killings from 1989. He is denied entry by Petrov's bouncer outside, prompting Evan to assault the bouncer, accidentally killing him in the process. Evan makes his way through the casino and, depending on the player's choice of playstyle, Evan either non-lethally takes down the mobsters inside or brutally kills them.

Upon reaching him, Evan tells Petrov that he came to ask some questions about his book and says that his friend Detective Pardo informed him about Petrov. Surprised, Petrov remarks that Pardo is not a very good friend to send him to a Russian Mafia operation and admits that Evan has "got balls" to risk his life to talk to him. Petrov only allows Evan to ask two questions and after he does so, demands for him to get out. Evan asks Petrov if he is of the same opinion that the police believes that the masked killings were a vigilante movement. Petrov says he had no idea what the killers were part of, but tells him that they were way too organized to be a vigilante movement as they nearly destroyed their organization and knew exactly where to attack the Mafia from. As for his second question, Evan asks Petrov why they specifically went after the Russian Mafia, but Petrov cannot give a clear answer. He explains that once the masked killers crippled the Russian Mafia's power, they vanished (likely due to 50 Blessings ceasing their activities). Petrov further informs Evan that the Mafia had even caught a few masked killers and tried to torture them for information, but it was all in vain, as they never talked. After promising his two questions, Petrov orders Evan to leave.

After Evan leaves the building, Petrov is never seen again, leaving his fate unknown. However, like several other characters, it is likely he may have been killed by the nuclear bomb dropped on Miami by the Soviet Union at the end of the game. 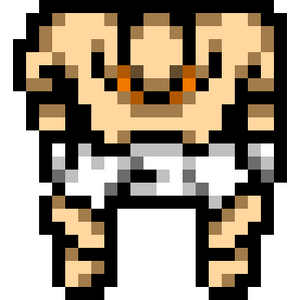 Petrov's in-game sprite while relaxing in his sauna. 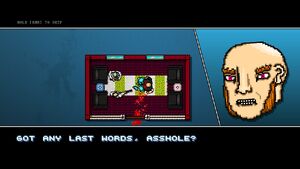 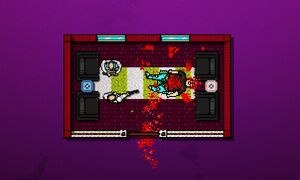 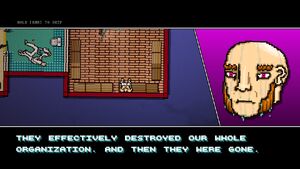 Petrov interviewed by Evan Wright.
Add a photo to this gallery

Retrieved from "https://villains.fandom.com/wiki/Petrov?oldid=3239368"
Community content is available under CC-BY-SA unless otherwise noted.