Petz is a major villain in Sailor Moon series, the oldest of the Ayakashi Sisters who serve under Rubeus.

She was voiced by Megumi Ogata in anime series who is replaced Wasabi Mizuta in Crystal in the Japanese version, and by Norma Dell'Agnese in DiC English dub, and Jessica Gee in Viz Media English dub in the English version.

Petz was tasked by Rubeus to infect humans with a virus that leave them weak enough to be replaced by Droids. Among the infected is Makoto, who transformed to Sailor Jupiter to defeat her Droid double with Petz arriving to avenge her younger sisters' death. She succeeds to capturing Sailor Jupiter before being destroyed from behind by Sailor Moon.

Petz is partnered with Calaveras as the two of them attempted to complete their mission after their younger sisters have been purified. But Rubeus betrays them to die, only for the two to be saved by Sailor Moon and allowing themselves to be purified as well to live in 20th century Tokyo. When the Ayakashi Sisters encounter Saphir, whom they assumed came to kill them for deserting the Black Moon Clan, Petz tended to him while revealed to have feelings for him. 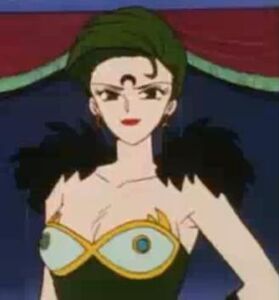 Petz as she appeared in the 90s anime. 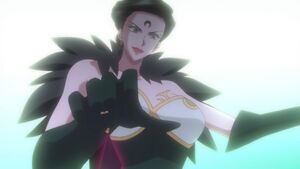