Phaedra Nixon is a member of H.I.V.E., acting as one of its leading members. She is an antagonist in the fourth season of Arrow.

She was portrayed by Lynda Boyd, who also played Jennifer O'Brien in Supernatural.

Along with other H.I.V.E. leaders, she travels to Star City to find out the progress Damien Darhk made with Operation Genesis. While there, she witnesses how Oliver Queen reveals Darhk's identity and his role as the leader of H.I.V.E. to the media because Darhk attacked him earlier. When Darhk welcomes her and the rest of the board, Nixon bluntly tells Darhk that they did not travel to Star City to watch Darhk carry out his vendetta. Their discussion is disrupted when Oliver Queen calls Darhk to trade his life for that of his friends.

The board and Ms. Nixon are then present when Darhk demonstrates his gas chamber to Oliver Queen. However, while intimidating Oliver the true purpose of the test is to find out whether the test subject in the chamber can survive the gas by use of a algae bred by H.I.V.E. . He can not and dies within seconds. Darhk then puts Oliver's sister Thea and his friends Felicity and Diggle into the chamber and tries to gas them, but the Black Canary and Malcolm Merlyn interfere. While the intruders fight of H.I.V.E. soldiers, Darhk leads the board members out of the room. When Merlyn blocks their way, Darhk dismisses the board members, who flee while Darhk battles Merlyn.

After the fight, Merlyn leads the board members into an underground bunker, where he shows them a vast corn field enhanced with the H.I.V.E. algae, that produces air that, while tasting a little surreal, is completely breathable. Nixon and the board members are impressed and Darhk tells them that Operation Genesis is on schedule and that phase four will begin soon.

Nixon is present at a board meeting in which Darhk explains the progress on phase four. She watches Darhk kill board member Thomas for disrespecting his wife. The meeting then continues as if nothing has happened and Armitage and Nixon address the matter of Quentin Lance, who has been aiding the vigilantes. Darhk assures them that Lance will soon be dealt with.

After having abandoned Darhk after he had lost his magic, Nixon is killed by Damien after he breaks out. 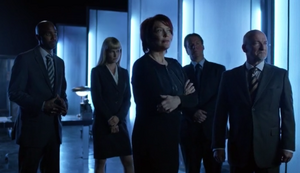 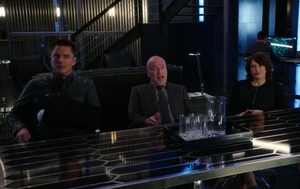