Experimenting on humans with Transmode Virus

Assimilate all life into Phalanx.

Drain all energies from planets they set their feet on before moving onto next planet.
Culminate in the creation of a Babel Spire that can send a signal to the Technarchy homeworld.
Conquer the universe.

Mechanically Modified Superorganisms
The Phalanx are techno-organic beings, whose nervous systems are composed of organic circuitry. Their bodies are structured like machinery, and the entire race has a single collective consciousness.

Given the powerful nature of the Phalanx, different individuals and governments around Earth (notably UK and China) attempted to experiment with the alien race.

The Phalanx are an ancient techno-organic race, which is an offshoot of the Technarchy. It is a race whose ultimate goal is to consume the universe. So far they have existed for a 100,000 life cycles, slaughtered 200,000 races, and assimilated 100,000 worlds. As they have conquered and killed, the Phalanx have learned and evolved. Their empire is called the Phalanx Dominion, which is ever expanding. When the Phalanx conquer a world, all on it are infected after which they drain the planet of all power and nutrition.

Every race feeds in its own way but for the Technarchy's method is particularly convoluted. A techno-organic race, the release of their transmode virus converts organic matter into Phalanx, a collective intelligence life-form. Members of the Technarcy then feed on the Phalanx, draining away their life energy. Though they were created by the Technarchy and are it's food source, the Phalanx have managed to create their own empires which do not appear to be targeted by the Technarchy unless someone brings them to the Phalanx.

On Earth, this evil race first appeared then when scientists experimented on the remains of the New Mutant Warlock, who is a member of the Technarchy, a society of techno-organic beings. The scientists obtained a strain of the transmode virus and injected it into humans, hoping to create a new generation of sentinel robots. Their experiment quickly got out of control. Transformed into Phalanx, their subjects began assimilating other humans. The Phalanx wanted to convert all life on Earth into techno-organic beings.

Fortunately, the Phalanx found mutants to be somewhat indigestible since they could not assimilate their genetic structure, they instead tried to kill them. After capturing a number of younger mutants the Phalanx drew the ire of the X-Men and were almost destroyed. The X-Men succeeded in destroying the Phalanx, but they later discovered that they were only the vanguard or scouts of the Phalanx, not true Phalanx but transient units. As they are part of a hive mind, all Phalanx across the cosmos were aware of what happened on Earth, knew of the X-Men, and how to counter their powers.

The Phalanx's aims on Earth were furthered by a number of human assistants. Dr. Stephen Lang, who had once built the Sentinels, was kidnapped by scientists and cybernetic-ally linked to the Phalanx. Though he retained his free will, Lang saw the Phalanx as a means for humanity to evolve to a level higher than mutants and decided to eradicate them. X-Factor's enemy Cameron Hodge was assimilated into the Phalanx and helped direct its actions. Notable among the many unwillingly humans to be assimilated was Jean Grey's older sister, Sara.

Recently, during the events of Annihilation, the corrupt robot Ultron was assimilated by the Phalanx, but he was so intelligent and advanced that he took control of them, become their king. The Phalanx accepted this, and worshiped him. The Phalanx succeeded in taking control of the Spaceknights and then their new allies, the Kree Empire (which dominated the Greater Magellanic Cloud, a satellite galaxy of the Milky Way). When the Kree began the test of their new defensive network, the Phalanx sabotaged Kree's defense systems directly through the Kree homeworld of Hala, surrounding the entire Kree Empire in an inescapable energy barrier. The also spread their Transmode Virus, turning all organic life forms in Kree Empire into Phalanx, fully under Phalanx's control and bringing newly converted members into their single minded matrix.

Kree and other sentients with higher powers are made into Phalanx Select, a team whose task is to prevent any attempts to stop the spread and control of the Phalanx. They also have a high degree of autonomy and individuality, granted by the Phalanx collective as they saw the need for units with the ability to adapt and think outside the box. As for the rest, they were used as either slave labor to run the machinery of the Phalanx empire or as fuel to power their empire via processing centers. The Kree not under control fought back against their oppressors and ultimately obliterated the entire race after Ultron was defeated. Those who survived the Kree-Phalanx War and had been infected by Ultron's version of the Transmode Virus were later cured. 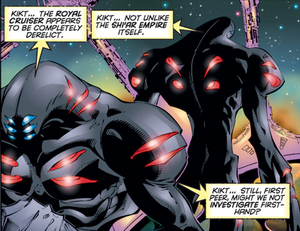 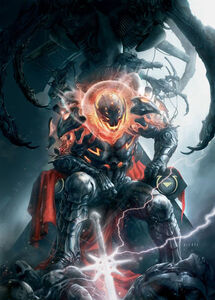 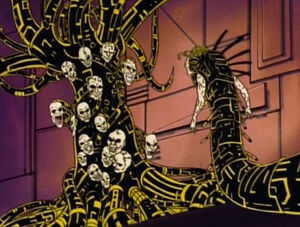 Nexus, the Supreme Ruler of the Phalanx Empire (X-Men: The Animated Series) 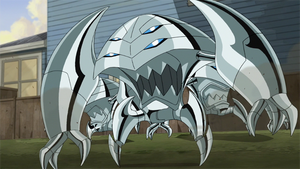 The Phalanx in Ultimate Spider-Man 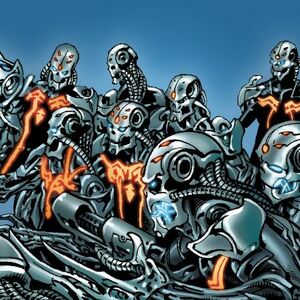 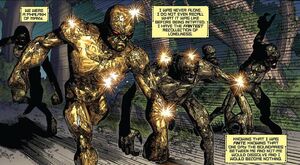