Master of Disguise
Skilled with weapons

The Phantom is the main antagonist of the videogame Ace Attorney: Dual Destinies, the fifth installment in the Ace Attorney series. He is an almost completely emotionless spy.

As he keeps wearing a mask, the Phantom's true face and appearance remain unknown, even after the end of the game.

The Phantom killed Athena Cykes' mother when she was only 11 years old, forcing Athena to watch, and got Prosecutor Simon Blackquill convicted. Before that, he killed Detective Bobby Fulbright and assumed his identity. The Phantom also sabotages a national symbol of pride, known as the HAT-1, a rocket, almost killing the astronaut on board. He also killed Apollo's close friend, Clay Terran, who had almost revealed the Phantom's identity. He is indirectly responsible for almost every murder in the game, including setting off the bomb in the courtroom that was thought to be the work of Ted Tonate, which could have caused massive amount of death. And he always framed someone else (including Athena, her best friend, Prosecutor Blackquill, and the astronaut) for his crimes. He has information on all kinds of organizations around the world, which is why most of them want him dead; there may have been assassins following his every move.

After an impromptu trial that proved that nor Simon nor Athena killed Metis Cykes and that spawned the theory that "Fulbright" was the phantom, he was called to testify.

When Simon Blackquill slashes "Fulbright's" mask, it gets torn apart, revealing a Solomon Starbuck mask. When Blackquill says that Starbuck couldn't be the phantom due to being on the rocket, the phantom then reveals an Aristotle Means mask. When Phoenix Wright tries to convict the phantom by using a small fragment of the meteorite, the phantom reveals a Wright mask. Each personality of said mask is mimicked perfectly. When finally proven to be the Phantom, he looks around and shouts to someone (possibly an assassin mentioned above) that he hasn't revealed anything yet and pulls his mask. He begins to panic as he starts removing masks trying to find his true face, each mask being of a villain in the game - Ted Tonate, Florent L'Belle and Aristotle Means, while debris fall. He then subsequently changes to Damian Tenma, his daughter Jinxie, Hugh O' Conner, Simon and even Aura Blackquill. The scene flashes between all the transitions while he questions who he really is. After changing to a final mask (Bobby Fulbright with the tear) he is shot by an unseen sniper, leaving him without a mask, but his face is hidden by darkness. Simon Blackquill confirms that the phantom survived the shot and will be to be protected and questioned by the prosecutor's office.

The Phantom is a master of disguise and is skilled with lots of sorts of weapons.

He is skilled at impersonating people. He could mimic Bobby Fulbright's dedication to justice and his ditzy yet passionate character. After being revealed as an impostor, he did good impressions of Aristotle Means or Phoenix Wright. The problem is that he is unaware of his real identity.

While a master impersonator, he is terrible at improvising lies. After the lighter that incriminated Athena was revealed to actually have Clay's blood, "Fulbright" claims that he is an undercover agent, that the phantom uncovered him and that he kidnapped his family to keep him compliant. His previous speech in which he "believed" Athena was guilty and his failure to say which family member was kidnapped made him less credible. Before ditching the Fulbright persona, he tried to express emotions, but his dialog mismatched his gestures.

Bobby Fulbright was an energetic, optimistic, and loud man who would constantly announce his love of Justice at the worst possible moments. He was easily manipulated, rather bad at his job, and treated like an annoyance or idiot by everyone around him. Despite his eccentric behavior, he was also shown to be rather fearless, as he remained completely unfazed after Simon Blackquill broke free of his shackles. He also had a habit of going off on tangents, either during investigations or trials, most of his speeches relating to his morality and desire to be fair and just.

However, it was eventually revealed that the real Bobby Fulbright had been murdered several years prior and replaced with an imposter. Despite this, due to how the Phantom would attempt to mimic whoever he impersonated as closely as possible, it can be assumed that the personality he adopted was almost identical to that of the real Fulbright.

The Phantom was a sociopath incapable of feeling genuine human emotions. He was an excellent actor, being able to perfectly replicate Bobby Fulbright for several years without anyone but Blackquill (who was an excellent psychologist) becoming suspicious of him. He could understand emotions but could not feel them, with the only time he got close to experiencing an actual emotion was when he was scared that he would be caught.

Despite being a great actor, he was terrible at improvising, as he needed time to prepare how he was going to act out his personality. When caught reciting his speech about Justice, it was ignored as a warning sign, due to being something that Fulbright could do without raising suspicion, as he was known for being a loud and talkative person. His lies in court were abysmal, as he had no time to fabricate an alibi, leading him to spout gibberish and easily proven lies that were spotted almost immediately. Despite the noose tightening around his neck, he still wasn't discouraged, as he was patiently waiting for the correct time to either clear his name or escape the courtroom.

When his mask was finally shattered, he jumped between different characters, adopting their faces and expressions to taunt the court. It became increasingly obvious how cowardly he really was, as he was willing to kill anyone to save his own skin, caring more about finishing the job he was assigned than himself. This gave him an almost inhuman persona, as he was so detached from humanity or reality that he couldn't even remember his own face. Despite this, he had a clear sense of right and wrong, but his lack of a moral compass made him willing to go to any length, even including trying to murder a child to cover his own tracks.

His real personality was never fully explored, as the Phantom had spent so much time in other people's minds that he had lost all his identity. When he realized that his mind was irreparably damaged, he had a genuine emotional breakdown, as without adopting other people's personas, he was nothing but a cowardly empty shell. 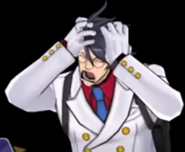 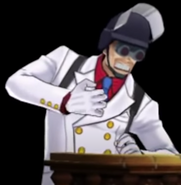