Henry Ravenswood, better known as the Phantom, is the main antagonist of the Disneyland Paris attraction Phantom Manor, which is that park's version of the Haunted Mansion. He is an evil and sadistic spirit bent on tormenting the living.

He was voiced by Gérard Chevalier in French and by the late Vincent Price in English.

Henry Ravenswood was born in 1795. As an adult, Henry had a wife named Martha and a daughter named Mélanie whom Henry was very protective of. While working as a prospector in 1849, he found gold in Big Thunder Mountain, Arizona. Ravenswood proceeded to force the Indigenous Shoshone people off of their land and establish the town of Thunder Mesa.

At some point in time, Henry had a gun duel outside of Ravenswood Manor. When the two duelists were back to back, Henry cheated and turned before draw was called to shoot his opponent in the back. Henry also cheated on his wife Martha with the family's chambermaid, Anna Jones. As for Mélanie, Henry kept her locked away in the manor for much of her youth with only the servants as her friends.

Later, when Mélanie was grown up, Henry became increasingly possessive of his daughter and resented the strings of suitors that pined for her attention. Believing no man was suitable for his daughter, Ravenswood arranged the deaths of four of her suitors, as Barry Claude was mauled by a bear, Captain Rowan D. Falls was sent off a waterfall in a rowboat, Sawyer Bottom was bifurcated with an industrial buzz-saw, and Ignatius "Iggy" Knight was blown up with a large amount of dynamite.

Despite Henry's best efforts, Mélanie eventually met and fell in love with a train foreman named Jake working for her father's company. The two quickly became engaged and had plans to leave the Mesa. Henry tried to stop the wedding in order to keep his beloved Melanie at home, but in 1860, an earthquake stuck the Mesa, killing Henry and Martha. Some said it was the wrath of the awakened Thunderbird which caused the earthquake.

Shortly after Henry's death, his ghost appeared within the mansion as, "The Phantom". On Mélanie and Jake's wedding-night, Henry lured Jake into the rafters of Ravenswood Manor. The Phantom subsequently murdered Jake by violently hanging him to death and leaving his corpse there. With the groom never showing up, guests abandoned the wedding, while Mélanie stayed behind and refused to believe her beloved would abandon her.

It is said that Mélanie believed that her intended would return to her one day, so she stayed locked inside the manor, never removing her wedding dress, and singing sad love songs. She eventually died within the mansion and remained within as a ghost. Her spirit would be an effective spirit of Henry's who frequently tormented and tortured her for decades to come.

Henry and his undead affiliate Madame Leota frequently summoned spirits into the manor. This included the ghosts of those who attended Mélanie's wedding party as a means of tormenting her. Henry also had a habit for luring foolish mortals into Ravenswood Manor in-order to murder them. To the people of Thunder Mesa, the Phantom would become a mysterious figure of local lore.

On the February 15th of 1882, an outlaw named Milo "One-Eye" Jones used the abandoned Ravenswood Manor as a hideout after robbing the Big Thunder Mining Company. Jones was never seen again and became one of the many presumed victims of the Phantom. In 1884, the missing persons incidents became so great that the Town Council of Thunder Mesa shut off access to Ravenswood Manor indefinitely.

The town sheriff Will Ketchum and mayor Artemus L. Hector sent many investigators into Ravenswood Manor meanwhile several spirits left the manor and terrorized citizens. The first group of investigators left the mansion screaming and half-mad. The second group consisted of several explorers and adventurers who were never heard from again after entering the mansion, presumably meaning they were killed. The third group was composed of sceptics from the eastern United States who declared the spirits were simply hallucinations and encouraged Ravenswood Manor to be reopened.

Henry Ravenswood assumed a human form in order to attend the reopening of Phantom Manor. At the ceremony, Henry assumed an elderly form and introduced himself as a representative of the Big Thunder Mining Company. Henry invited several of the attendees into the mansion as a means of gaining new victims. The Phantom had a tendency for bringing in guests of the mansion to torment in this manner.

The Phantom serves a similar role as the Ghost Host in the Haunted Mansion. He greets guests and tells them that a beauty used to live in the house. He scares guests and is seen showing off the hanging corpse of the groom, tugging at the rope and making it swing, but then vanishes.

He is later seen standing over a ghostly reenactment of Melanie's failed wedding, cackling evilly. He then appears in a small graveyard out back, holding a shovel and standing over an open grave, once again laughing sadistically.

At the end of the ride, the Phantom is seen again, laughing and gesturing towards a coffin. As guests pass mirrors, Mélanie appears in their buggies following them out.

The Phantom is a dark sadist who revels in pain and sorrow. He kills without thinking twice, and flaunts his kills like they are sport. He loves tormenting the innocent and destroying their lives, and is completely unstoppable in his evil. However, considering how much Ravenswood loved his daughter in life, it is unclear why he would ceaselessly torment her after his death, other than for the sole purpose of keeping her in the Manor forever. 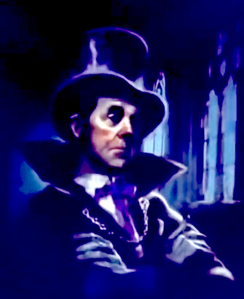 Henry Ravenswood prior to his death. 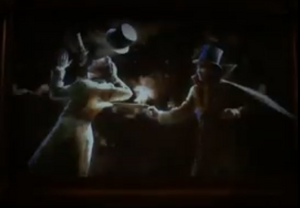 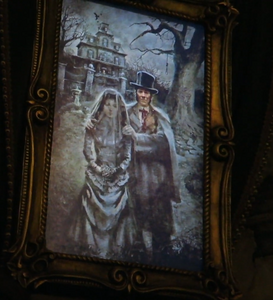 Portrait of Ravenswood with his daughter when they were still alive. 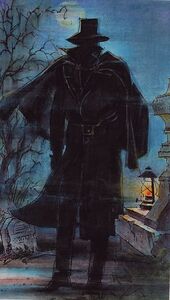 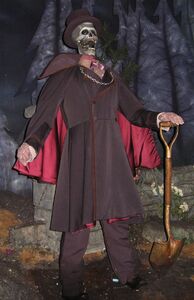 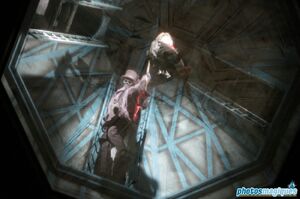 The Phantom with the hanging corpse of the groom. 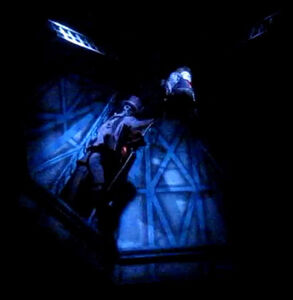 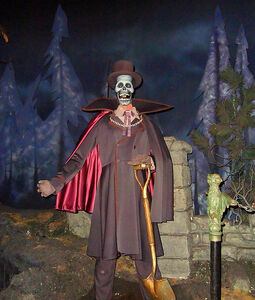 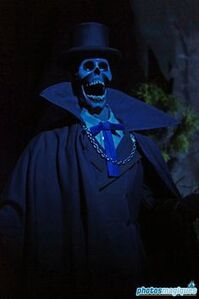 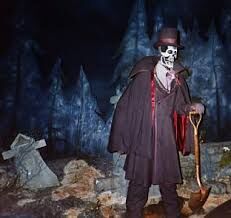 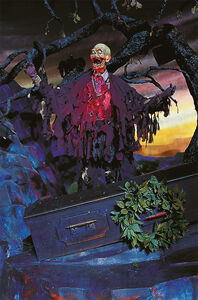 The Phantom as a rotting corpse prior to the 2019 refurbishment. 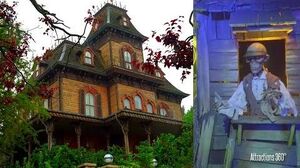 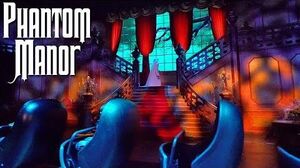