Phantom Bomber, also known as Brain Bomber, is an antagonist from the Bomberman series. He is a member of the Five Dastardly Bombers who serves under Buggler.

In Super Bomberman R, he was voiced by Hozumi Gouda in the Japanese version, and by Vinay Murthy in the English dubbed version.

Phantom Bomber acts as the boss of World 4-7. He appears as a purple robed figure and utilizes remote-controlled bombs that while lacking in firepower are able to be detonated at will by himself. After losing the battle of World 4-7, Phantom Bomber hops into his giant-robot and acts as the boss of World 4-8. Brain Bomber's giant-robot is a gigantic version of Bomberman that drops very large bombs onto the battle-field. After being defeated Brain Bomber is seemingly destroyed as Bomberman blows up his area and goes on to face the final villain of the story.

Phantom Bomber returns as a boss in Super Bomberman 3, fighting in a mech alongside the Ponchos.

Although seemingly destroyed, Brain Bomber actually returns and takes Plasma Bomber's place as leader of his team in Bomberman Tournament.

Phantom Bomber is fought on World 3: Planet Brainwave. Controlling his planet to trap the group, he is first fought on foot. He switches to his Mystic Hatter on first defeat. Although his planet started to collapse in on itself, Blue Bomber manages to save the group's hides by stopping it at the promise of reward.

After Buggler makes his black hole, he is fused along with his teammates into the Great Gattaida. After this fails, he joins forces with Bomberman to defeat him.

Phantom has a purple body with yellow eyes and has an eyepiece on his face while wrapped in a purple cloak.

Phantom Bomber is the brains behind his team, scheming and enjoying logic-based puzzles. As a leader, he is uncaring about his team, only his goals. 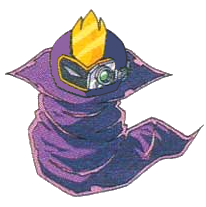 Phantom Bomber's design in Super Bomberman 2.
Add a photo to this gallery

Retrieved from "https://villains.fandom.com/wiki/Phantom_Bomber?oldid=3462336"
Community content is available under CC-BY-SA unless otherwise noted.