Noncorporeal Mind-Breaker
Phantom Chica is a major antagonist in the game Five Nights at Freddy's 3 and is one of the six phantom animatronics in the game, serving as one of the secondary antagonists of the actual gameplay of the game. She is a hallucination of a burned and damaged Chica.

Phantom Chica is essentially the same model as Chica from the first game, but she lacks eyes and instead has pin-pricked, white irises. She also looks to be charred or burnt, possibly foreshadowing the torching of the attraction.

Phantom Chica lacks a movement pattern, but rather randomly replaces the arcade machine's monitor with a distorted image of her face, the frequency of this occurring increases as the week progresses. If the player does not change Monitor views when this occurs, Phantom Chica will appear on the left side of the Office and proceed to lunge at the player if viewed, disappearing and disabling the ventilation system.

Phantom Chica returns with a minor appearance in Ultimate Custom Night. Rather than being a customizable enemy, Phantom Chica instead makes a cameo appearance in the unlockable FNaF 3 offices. She can be seen on the screen of the arcade cabinet in that office. 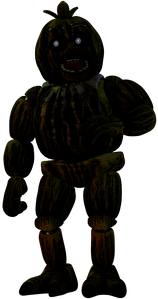 Chica as she appears in Five Nights at Freddy's 3. 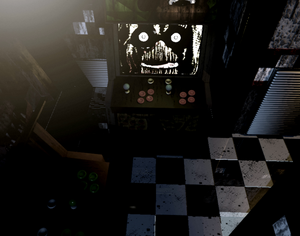 Phantom Chica's face on the arcade machine's monitor in CAM 07. 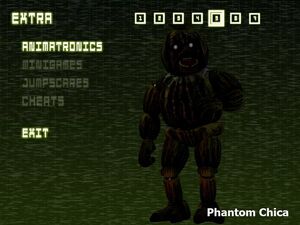 Phantom Chica on the Extra menu. 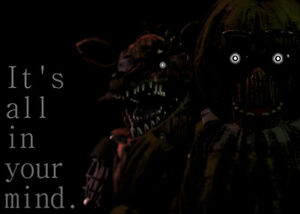 Chica in a teaser for Five Nights at Freddy's 3 alongside Phantom Foxy.