Scrapped version of Foxy the Pirate.

Phantom Foxy is essentially the same model as Foxy from the second game, but he lacks eyes and instead has pin-pricked, white irises. He is missing his right forearm and hook, this arm seeming to be in the box full of parts in The Office. Phantom Foxy also looks to be charred or burnt, possibly foreshadowing the torching of the establishment.

Phantom Foxy lacks a movement pattern, but rather randomly appears standing in front of the box of parts that is present in The Office. If the player does not raise the Monitor before they look at him directly, Phantom Foxy will lunge at the player, disabling the ventilation system and the audio devices. The frequency of his appearance increases as the week progresses. 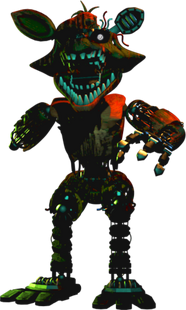 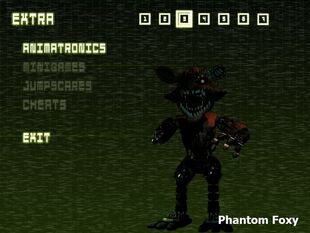 Phantom Foxy on the Extra menu. 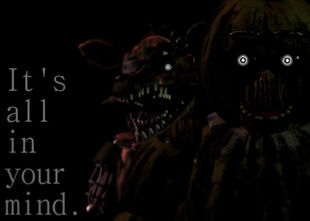 Foxy in a teaser for Five Night's at Freddy's 3 as well as Chica.

Phantom Foxy's texture while in the Office.
Add a photo to this gallery

Retrieved from "https://villains.fandom.com/wiki/Phantom_Foxy?oldid=3501405"
Community content is available under CC-BY-SA unless otherwise noted.