In one of the trailer photos, what looks like a broken down, unfinished Freddy can be seen as just a torso and head. However, Freddy does actually return, not in the Freddy torso and head, but as an antagonistic phantom or spirit that still stalks the player. Since Freddy is a spirit, he is unable to kill the player, despite his ability to jumpscare the player.

He attacks the player throughout the nights along with his fellow spirits but without any luck killing him. However, as the nights go by, he gains enough power to disable all three systems.

Phantom Freddy's silhouette will randomly appear to walk across the window in front of the player. The player must be viewing either the Monitor or the Maintenance Panel until Phantom Freddy finishes walking across the length of the window to avoid triggering his jumpscare. If the player fails to do this while Phantom Freddy is wandering, he will duck down, completely removing himself from the player's sight. He will then jumpscare the player a few moments later, disabling the audio, sound, or ventilation. In later nights, he is powerful enough to disable all three, and can also be considered the most dangerous phantom because of this ability and his recurring appearances.

In the cutscene after Night 1, Freddy is playable, and Afton dismantles him and later his friends. After Night 5, the final cutscene is shown in which golden Freddy and the other spirits, now children again, corner their murderer until he enters Spring Bonnie, unwittingly "killing" himself, becoming Springtrap. Seemingly satisfied, all spirits leave.

After Night 6, the horror attraction burns down. If Phantom Freddy was a spirit of a child, then he was most likely set free. Springtrap survives the fire.

Phantom Freddy returns as a customizable enemy in Ultimate Custom Night. In this installment, Phantom Freddy will begin to appear into the office over time. The player must shine him with the flashlight to make him disappear. If the player fails to make him disappear in time, Phantom Freddy will jumpscare the player forcing them to reset the ventilation. He will appear faster, not only depending of his A.I level, but also if the office's temperature is too high, similar to how Freddy Fazbear will move faster the higher the heat of the office is.

Freddy, along with the other animatronics, Toy or otherwise, appears to have been scrapped or otherwise lost completely in the thirty-year gap between games.

Phantom Freddy returns with the same mechanic as in FNaF 3 in the category titled "FNAF 3", serving as a hallucination or distraction. He cannot harm the player. He'll walk outside the office from time-to-time, serving as a distraction to the player. He also appears in Vent Repair, Ennard Hard Mode Section, as a giant, red tinted version of him walking around outside the map.

Phantom Freddy is, essentially, the same model as Withered Golden Freddy (with the exception of a missing ear and wires coming out of his left eye, resembling Withered Golden Freddy), with white pin-pricked pupils in his eyes, which he only has during his jumpscare. He appears to be charred and burnt, foreshadowing the fire that broke out in the establishment. His mouth can usually be seen hanging open. His two lower legs are never seen in the game, but through his walking animation, the lower right leg looks ripped out and torn from his body.

Interestingly, he appears to be colored golden, or at least green, though this may simply be from his burnt appearance or the overall green hue of the game, as the other phantom animatronics share the same properties of his color scheme.

In FNaF VR, he looks mostly the same, but now resembles the FNaF 1 version of Freddy, albeit transparent in places, revealing the endoskeleton underneath. He also appears to be damaged somewhat, with tears in his costume. 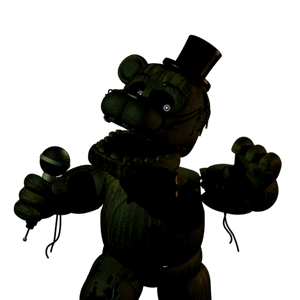 Phantom Freddy as he appears in Five Nights at Freddy's 3.

Phantom Freddy walking outside the office.

Phantom Freddy ducking under the office. 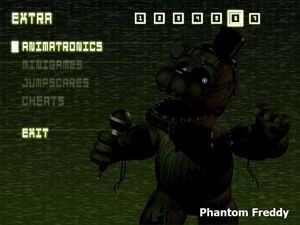 Phantom Freddy on the Extra menu. 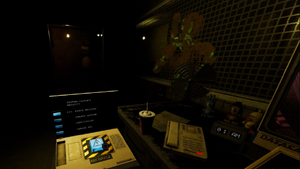 Phantom Freddy as he appears in FNAF VR: Help Wanted.