Evil Spirit from Beyond (1st Phantom Ganon only)

Phantom Ganon is a recurring antagonist in The Legend of Zelda series, often serving as a boss in later stages.

He is an evil clone created by Ganondorf himself that acts a loyal enforcer to his commands. While he is nowhere near powerful as the original, he still retains power enough to make him a deadly foe.

Phantom Ganon is the boss of the Forest Temple. As Link enters the boss' room, he sees many identical paintings on the wall of a road leading to a dark castle; Phantom Ganon jumps into one of them with his horse. After disappearing, two Phantom Ganons ride to the front of the painting, and a purple hole appears in one of them, which is the one the real Phantom Ganon will jump out of. As he jumps out, Link's got to shoot him with an arrow from the Fairy Bow. After taking sufficient damage, he will leave his horse.

He will now start to attack by shooting an energy star at Link. He, in turn, has to bounce the star back at him with the Master Sword. He will retaliate but Link must not give up; after enough times, Phantom Ganon will eventually be hit and fall to the ground, paralyzed. The hero now has to slice at him with the Master Sword. After enough hits, he will be defeated. Link then gains a Heart Container and the Forest Medallion. As for Phantom Ganon, Ganondorf banishes him to the area between dimensions.

Phantom Ganon appears again as a dungeon boss. He confronts Link twice, first early in the game at Hyrule Castle, and again in the Temple of Darkness. He fights similarly to Ocarina of Time, where he throws an energy orb at the Links, and they must hit it back. Failure to strike the orb causes fragments to fly out. Once Phantom Ganon is struck by the orb, the Links must run up to him and slash at him to damage him. In the rematch at the Temple of Darkness, Phantom Ganon can create clones of himself. The real Phantom Ganon will throw green energy orbs, while his copies throw white orbs that break when a Link strikes his sword at it.

After withdrawing the Master Sword from its pedestal, Link travels back to the Forsaken Fortress to confront Ganondorf and the Helmaroc King to rescue his sister Aryll. Upon arrival, however, his path is blocked by Phantom Ganon. The pair engage in "Dead Man's Volley" during the ensuing battle and Link manages to defeat him. Phantom Ganon vanishes and leaves behind a Treasure Chest containing the Skull Hammer.

Later, after restoring the Triforce of Courage, Link traverses to the submerged Ganon's Tower after Princess Zelda is kidnapped by Ganondorf, where he is again confronted by Phantom Ganon. This time, however, Link must fight him several times in a large maze with many doors. After each defeat, Phantom Ganon drops his sword. By going through the door that the hilt of the sword points at, Link is eventually rewarded with the Light Arrows. After traveling to the next room, Link is confronted a final time and permanently defeats him solely with the use of his new Light Arrows.

Phantom Ganon was never created in the timeline, they have a counterpart named Agahnim who takes their place as Ganon's clone.

The Phantom Ganon from Ocarina of Time appears in this game as a sticker. When equipped during the Subspace Emissary, it boosts Ganondorf's darkness elemental attacks by 40.

Phantom Ganon appears in Hyrule Warriors Legends, where he serves as the main antagonist of the Great Sea Saga, sporting his design from Wind Waker. This time around, he carries two swords instead of one, likely referencing how his master wielded two swords in the game.

Following the defeat of his master, he takes over his army then gains control of both Cia's powers and the Triforce of Power, using them to open a rift into the Wind Waker era. He is eventually defeated by Link, Lana, and their allies. Together, the team was able to undo his actions on Hyrule. 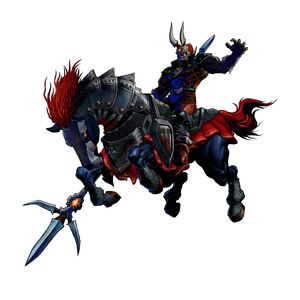 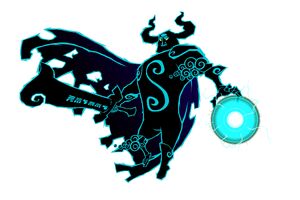 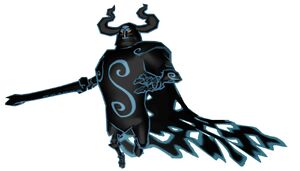 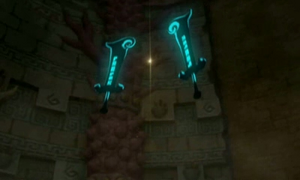 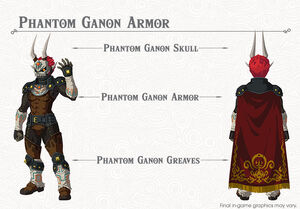 Artwork of the Phantom Ganon armor set in Breath of the Wild. 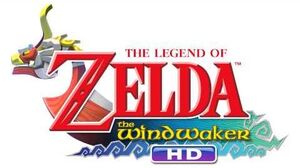 Phantom Ganon - The Legend of Zelda The Wind Waker HD