The Phantom
The Bogeyman

Kill as many people as he can (succeeded).

Avoid being caught and identified (succeeded).

The Phantom Killer, also known as The Phantom, is the main antagonist of the 1976 crime/slasher film The Town That Dreaded Sundown, and a minor, but pivotal antagonist of its 2014 sequel of the same name. Based on the real life Texarkana moonlight murders of 1946, the Phantom Killer is a deranged serial killer primarily stalking various lovers' lanes and murdering its occupants, as well as terrorizing residents of the town of Arkansas.

He was portrayed by Bud Davis.

Prior to the "phantom attacks", which came eight months following the end of World War II, Texerkana was a peaceful and bustling town to many, with its citizens preparing for a bright, war-free future. All of this changed on the night of March 3, 1946, when a young couple of Sammy Fuller and Linda Mae Jenkins parked on a secluded lovers' lane and are assaulted by a masked assailant who had pulled out the car engine's wires. Sammy is cut on the broken glass of the car and pulled out while the Phantom gets in with Linda. Both victims are reported safe the next morning after Linda is found barely alive, her breasts "heavily bitten, literally chewed". Police Chief Sullivan is then advised to warn teens and college students from parking in lonely areas at night.

On March 24, Deputy Norman Ramsey is investigating an abandoned car in a lovers' lane section when he hears multiple gunshots in the distance. Ramsey finds the corpse of Howard W. Turner in a ditch and the corpse of his girlfriend, Emma Lou Cook, beaten and tied to a tree. Ramsey spots the Phantom escaping and desperately attempts to catch him, but is unsuccessful and the Phantom escapes in a car. After the murders, the town sells out of guns and homes are safely modified as to avoid any break-ins. Sheriff Barker informs Ramsey that they are getting the assistance of the country's best criminal investigator, Captain J.D. Morales, the "Lone Wolf" of the Texas Rangers. Morales is then put in charge of the ongoing investigation and Ramsey is assigned to assist Morales, while Patrolman A.C. "Sparkplug" Benson is set to act as his driver.

At a local barber shop, Barker explains to Morales that he believes the Phantom attacks every 21 days, which proves to be true on the night of April 14. Trombone player Peggy Loomis leaves with her boyfriend Roy Allen to Spring Lake Park, when they are about to leave, the Phantom jumps the driver's door and pulls Roy out the car as Peggy crashes it in a panic. The Phantom beats Roy as Peggy escapes, catching the Phantom's attention as he catches up to her. Upon capturing her, he ties her arms to a tree and shoots Roy after he tries to escape. The Phantom then puts a pocket knife in the distal end of the slide of Peggy's trombone, killing her with it as he "plays" trombone, the knife stabbing her through the trombone as she's tied to the tree.

After the murder, Morales and his fellow officers psychiatrist Dr. Kress at a restaurant, where he explains that the Phantom is likely a middle-aged man driven by a sadistic, sexual desire. Kress expresses his doubt on the theory as a man wearing the Phantom's shoes leaves the restaurant, revealing that the Phantom had been listening to their conversation the whole time. At a gas station, a man named Johnson explains that he was forced to drive a man to Lufkin while being held at gunpoint. While driving, Ramsey is informed of the suspect and gives chase, the suspect, Eddie LeDoux, first refuses to know Johnson and his role as the Phantom, but eventually confesses, although Morales is unconvinced, Johnson identifies him as the robber.

On May 3, Helen Reed is unknowingly stalked by the Phantom at a car park and is followed home, she asks her husband Floyd if he hears anything outside, but he doesn't. The Phantom then appears through the window and shoots Floyd in the head twice, he succumbs to his wounds after Helen finds him dying. She goes to the telephone and goes to call the police, but is shot twice in the face by the Phantom, the latter having broken into the home. Helen survives and manages to crawl outside into a cornfield as the Phantom hunts her down with a pickaxe, but leaves after she arrives at a neighbor's house. News breaks out of the attack and people start boarding up their doors and windows, fearing that they are next on the Phantom's list.

Later, Morales and Ramsey are informed of a stolen car that matches the ones found at some of the previous murders. During their investigation of a nearby sand pit, they spot the Phantom and give chase into the woods, but the Phantom jumps to the other side of a train and tries to escape, but is shot in the leg, although he manages to escape and flees after the police send their bloodhounds after him. 30 years later during winter of 1976, The Town That Dreaded Sundown premiers in Texarkana and the Phantom is seen waiting in line to watch the movie, revealing that he had indeed survived.

The Phantom Killer's events are fictionalized into the 1976 film, and are one of the reasons of a string of copycat murders striking the town in late 2013. With the killers taking on the moniker of the Phantom, although they are eventually killed.

The movie's rendition of the Phantom stays accurate to official descriptions of the Phantom's alleged personality, that of a cold-blooded, ruthless, homicidal, insane, and intelligent murderer. The Phantom was a smart, crafty, and diabolical individual, using various methods to execute his victims and hunting the surviving ones down relentlessly. The Phantom was likely motivated by a sexual urge, as evident when he had apparently chewed and bitten Linda May Jenkins' breasts. His intellect and determination to get away with his crimes is further evident by the dastardly chase scene that almost cost him his life.

The Phantom's sadism and psychopathy are strengthened when, long after the murders of 1946, he is alive and re-watches the fictional events which took inspiration from his crimes 30 years later, with no remorse or empathy for re-watching his horrific actions. 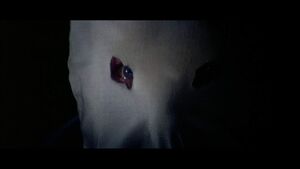 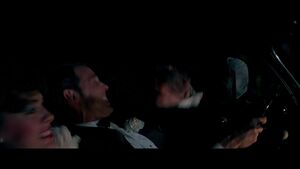 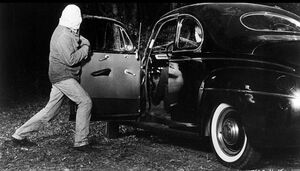 The Phantom Killer attacks his fourth and fifth victims. 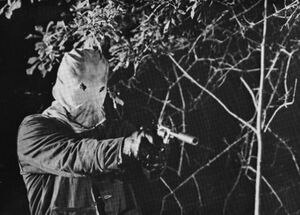 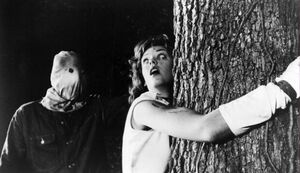 The Phantom Killer before killing Peggy. 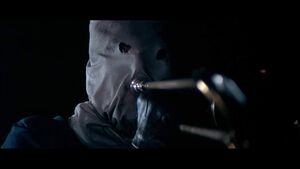 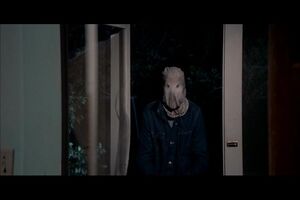 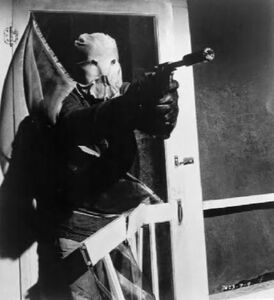 The Phantom Killer aim his gun at Helen. 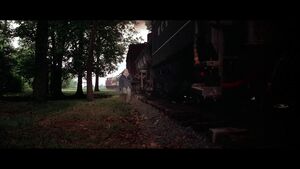 The Phantom Killer escapes the police from the opposite side of a train. 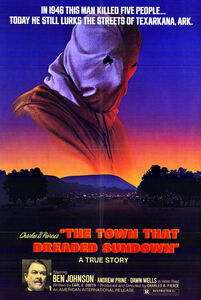 The Phantom Killer on the poster for the movie. 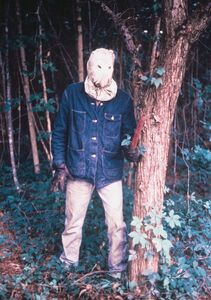 Retrieved from "https://villains.fandom.com/wiki/Phantom_Killer_(The_Town_That_Dreaded_Sundown)?oldid=3766678"
Community content is available under CC-BY-SA unless otherwise noted.