Destroy Fairy Tail and cement its status as the superior guild in all of Fiore.

Phantom Lord was one of the strongest guilds in Earth Land prior to being disbanded. Phantom Lord served as the titular main antagonist faction of the Phantom Lord Arc of the anime/manga series Fairy Tail but was ultimately defeated during its war with Fairy Tail.

During the year X784, Jude Heartfilia hired the guild to bring her daughter Lucy back home, a Celestial Spirit mage who had recently joined Fairy Tail, Phantom's main rival guild. This triggers a veritable war between the two guilds that culminated when all members of Phantom Lord were defeated by some of the strongest members of Fairy Tail (except Laxus Dreyar and Gildarts Clive).

After this, the Council of Magic decided to dissolve the guild and as a result all members who were part of it lost their sight each other.

Phantom Lord was a renowned guild that included many powerful magicians in its ranks, its Master Josè Porla was part of the order of the Ten Wizard Saints and was skilled and powerful in the use of multiple forms of dark magic. Besides him, the guild was composed of other notable S-Class members; the Element 4 team and Gajeel Redfox (which he has been described by many and Josè himself as the best warrior the guild has available thanks to his superhuman abilities and his Iron Dragon Slayer Magic). Phantom Lord was also said to have a lot of members, likely more than Fairy Tail itself.

However, beyond the overall strength of its members, Phantom Lord proved to be an extraordinarily powerful guild from the military point as it is the only known guild that possessed numerous scattered bases throughout the Fiore's region.

Not to mention that the main base was able to turn into a giant almost indestructible mechanical robot, equipped with a powerful Jupiter Cannon (which after the defeat passed into the hands of Fairy Tail and was used 8 years later during the war against Alvarez Empire and the spell Abyss Break which, through the combined powers of the members of the Element 4 's group, has been described as so powerful as to wipe out entire cities.

Phantom Lord also possessed various branches and subdivisions all across Ishgar showing that it had a much greater reach than the main city. It's unknown what cities these divisions were based at, but they were numerous showing how large Phantom was prior to its defeat. These divisions were defeated by Mystogan of Fairy Tail during the Fairy Tail-Phantom Lord Guild War and their banners taken by the S-Class Mage. 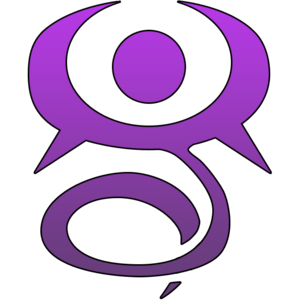 The iconic emblem of the Phantom Lord Guild. 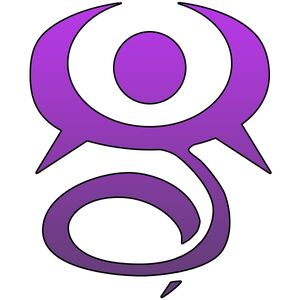 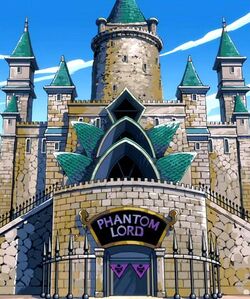 The Phantom Lord Guild base in Oak Town 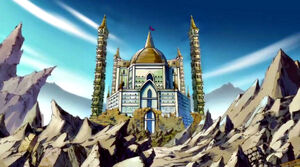 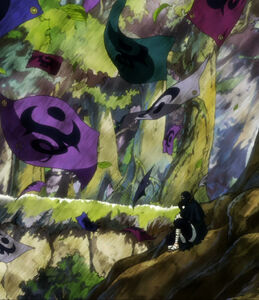