Sounding off an odd radio static

Noncorporeal Mind-Breaker
Phantom Mangle is an antagonist in the game Five Nights at Freddy's 3 and is one of the six phantom animatronics in the game. He is a hallucination of a burned and damaged version of the Mangle.

Mangle's mask can be seen in a box among other Toy Animatronics.

Mangle also appears as a Phantom, much like the other animatronics. Unlike the other Phantoms, however, he will not jumpscare the player. And much like The Puppet, he will also simply stare at the player. Phantom Mangle looks much like Mangle did in the second game, but with a burnt appearance, possibly foreshadowing the fire that broke out in the establishment. Phantom Mangle seems to have half of his left eye missing.

Phantom Mangle sometimes appears on CAM 04 hanging from the ceiling and, once spotted, will start emitting loud, garbled radio interference. When the player lowers the Monitor, Phantom Mangle will rise up behind the window and remain. After a few seconds, he will drop down from below the window, thus ending the hallucination and triggering an audio error.

Phantom Mangle returns as a customizable enemy in Ultimate Custom Night. Phantom Mangle behaves just like he did in FNaF 3, where he will randomly appear on the camera and if the player fails to change the channel of the camera or close the camera, Phantom Mangle will cause a loud screeching noise, upsetting noise-sensitive animatronics such as Lefty or Music Man. 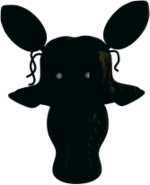 Phantom Mangle as it appears in Five Nights at Freddy's 3. 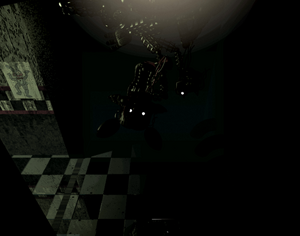 Phantom Mangle hanging from the ceiling in CAM 04. 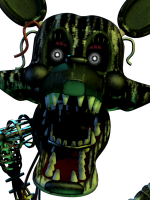