Make a profit off of the Second Extrasolar War.

The Phantom Talon Corp is a mercenary organization that serves as the secret antagonistic faction in Killzone Mercenary. The organization is led by Anders Benoit and has been working for both sides of the Second Extrasolar War. By the end of the game, the PTC becomes the enemy.

The Phantom Talon Corp was founded in 2344 by Anders Benoit and Oliver Adamska. Both of them had founded the PTC on Earth and were soon hired. The PTC first started out in various small/minor operations mainly on human colonies. Benoit took over after his partner Adamska was killed in 2348 due to unknown circumstances. Benoit took over and soon established tow new affiliates on the human colonies, Skull Knight Enterprises and the Eclipse Forces. By the time the Second Extrasolar War had broken out, the PTC was already being hired for vairous major military operaitons.

During the events of Killzone Mercenary, the Phantom Talon Corp is hired by the Interplanetary Strategic Alliance during the Invasion of Vekta at the hands of the Helghan Empire. Two Phantom Mercenaries were sent in, Arran Danner and Damian Ivanov to the city of Diortem where the ruthless Colonel Vyktor Kratek is hiding at and is interrogating ISA Admiral Alex Gray in order to find biological weapons for the Helghast Military to use. The two of them brake through Helghast Defenses and finally make it to Kratek only to have him critically wound Gray and run off to escape the city. Eventually, the PTC gets the money they were promised after the Helghast Forces were forced to withdraw from the city.

Two years later in 2359, the PTC is hired again to help the ISA brake through during Operation Archangel. The first mission was to help disable Helghast Defenses that were keeping the ISA Fleet at bay and were eventually hired by Admiral Gray to breach the Vetkan Embassy in Pyrrhus in order to rescue the Ambassador and his family. Danner manages to brake in only to have the Ambassador and his wife dead at the hands of Helghast Infiltrators and his son to be the only survivor. The son was rescued as the ISA continued to advance on to Helghan's shores and the PTC was still being hired. 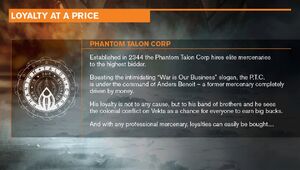 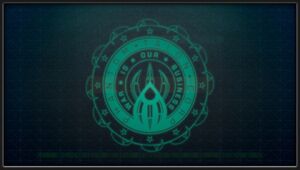 Retrieved from "https://villains.fandom.com/wiki/Phantom_Talon_Corp?oldid=4346543"
Community content is available under CC-BY-SA unless otherwise noted.