Escape from the Phantom Zone.
Kill Clark Kent (all failed).

The Phantom Wraiths, also called Phantoms and Wraiths, are hostile incorporeal spectre entities from the Phantom Zone and villains in the WB/CW TV series Smallville.

Phantom Wraiths often appear to be incorporeal versions of Kryptonians that have been stripped of their physical body, others like Bizarro and Dr. Hudson, were non-corporeal humanoids. They are the souls of criminals who have been condemned for eternity to the Zone.

Phantoms Wraiths are cast or portray criminals sent to the Phantom Zone with their physical bodies eliminated for the most horrific of crimes. Resembling wraiths, the bodiless phantoms roam the Zone at will, attacking with little, if any warning.

Though primarily insubstantial, they are able to cut, and even grab, their victims.

Outside of the Zone, they are not shown to have any substance; however, they are able to possess a host at will. Once they do so, the host body gains any abilities the Phantom Wraith may have had in its original form.

However, these powers vanish once a Phantom leaves, or is forced out of, the individual they are possessing.

Phantoms can be forcibly removed from a host using a Crystal of El or a similar device. It is worth noting that if a phantom possesses a vessel of its own DNA, such as a clone, it will be made whole again, as seen with General Zod.

Wraiths are incorporeal beings, often seen shrouded in tattered dark-gray clothing which conceals a spirit-like being underneath. The wraiths has gray decayed looking skin that covered the entire wraith like a skeletal structure.

When a Phantom possesses a host, the vessel's eyes turn black.

Wraiths have the following powers:

Phantom wraiths can be drawn out of their possessed hosts by using a Crystal of El; this presumably either destroys them or returns them to the Phantom Zone. They are also vulnerable to the Martian Manhunter's red crystal.

However, the Crystal of El was not effective against the wraith later known as Bizarro.

The Phantom Zone is an alternate timeless dimension wormhole used as a prison for the worst Kryptonian and alien criminals. Many of the prisoners exiled to the Zone were captured by the Martian Manhunter when he worked as a bounty hunter for Jor-El.

Phantoms roamed freely, able to attack at will, and the inhabitants are violent abominations. It is a desert-like wasteland under a blue sun that never sets.

When Clark Kent was sent to the Phantom Zone by General Zod (who had possessed Lex Luthor), he was attacked by numerous phantoms before being rescued by Raya, an ally of Jor-El, using a Crystal of El to scare the wraiths away. As Raya nursed Clark back to health at her encampment, she told him the true nature of the phantoms and that the only thing they fear was a Crystal of El.

When Clark escaped from the Zone, seven meteor-like objects fall from the sky out of the Phantom Zone, one of them being Clark and confronted Zod, he used his father's crystal to remove Zod's essence from Lex's body and send it back into the Phantom Zone.

Clark battled Baern, who possessed a young boy and tracked Clark down to Smallville where he was at first defeated but drained Brainiac's hard drive of its power to fuel himself so he could defeat Clark and a visiting Raya. Clark and Baern dueled at the Fortress of Solitude, where Baern killed Raya but was removed from his host by Clark using the Crystal of El.

Dr. Hudson attacked Clark and entered his mind to take over his body, but the Martian Manhunter appeared and helped Clark battle Hudson in his mind using his telepathy and captured Hudson with his red crystal.

Bizarro used numerous human vessels and was being tracked by Lex and also the Martian Manhunter, who was working with Lionel Luthor. The Martian Manhunter attempted to capture Bizarro, but was severely injured and fled as Lex arrived; unfortunately for Lex, Bizarro fled as well.

Bizarro later possessed Philipe Lamont, a boy who Lex had captured and that brought to Reeves Dam. Bizarro later left the boy's body and took a piece of Clark's Kryptonian DNA to create a body for itself, in the process destroying the Crystal of El, to which it was immune.

Kara was sent to the Phantom Zone by Brainiac after he used her to travel back through time to Krypton in 1986. In the Zone, she encountered numerous wraiths and battled Faora.

She escaped when Kara was letting a trapped Lois Lane out while Clark stood guard and battled wraiths to allow Lois to escape. Faora was later captured by Kara using the Martian Manhunter's crystal. 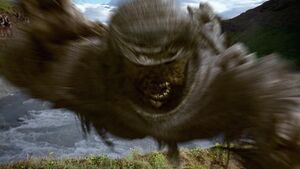 Bizarro is the well-known of other Phantom Wraiths who escaped from the Phantom Zone. 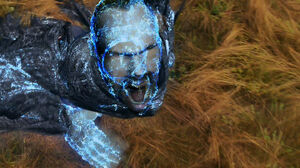 General Zod as a Phantom Wraith. 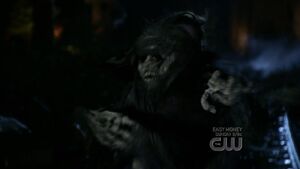 Faora as a Phantom Wraith. 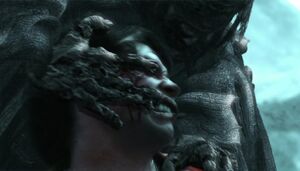 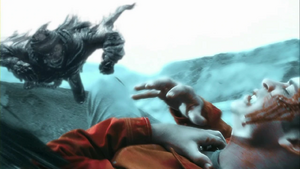