Varies (depending on the member)

After not only having his latest plot foiled by Batman, but being rejected as the Caped Crusader's greatest arch-nemesis as well, Joker laments to Harley Quinn about how he is not respected as a villain. While watching Lois Lane's news interview with Superman, Joker becomes frustrated at how Superman had a healthy hero-villain relationship with General Zod, yet Batman avoids having one with him. Towards the end of the interview, Superman states that he was forced to imprison Zod in the Phantom Zone, which also has some of the most evil villains of all time housed in it, getting Joker to formulate a new plan.

As Dick Grayson starts following his example and plunges head-first into danger, Batman bargains that, if he is released, he will return all the escaped prisoners to the Phantom Zone and then return to his imprisonment, to which Phyllis agrees to. Upon returning to the real world, Batman saves his friends from being destroyed by the villains from the Phantom Zone and regains the Phantom Zone Projector. Batman and his friends then prepare to defeat the villains and are unexpectedly joined by Joker's old henchmen, who want revenge on Joker for not taking them seriously. Batman and his allies then start to fight back against Joker's allies and eventually banish all of the criminals back to the Phantom Zone, although they end up being too late to stop Joker's bomb. However, Batman successfully manages to convince Joker to help them save the city. 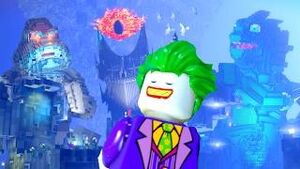 Retrieved from "https://villains.fandom.com/wiki/Phantom_Zone_Criminals_(The_Lego_Batman_Movie)?oldid=3954670"
Community content is available under CC-BY-SA unless otherwise noted.