Singing
Sonic Scream
Immunity to attacks while in light
Intelligence

Destroy Mario and his allies (failed).

The Phantom of the Bwahpera, also known as simply Phantom or Tom Phan, is a minor antagonist in Mario + Rabbids: Kingdom Battle. He is a fusion between a Rabbid, a Boo Balloon and a Gramophone created by Bowser Jr. and Spawny, and serves as the boss of Spooky Trails. The Phantom shares his name with his song.

The Phantom of the Bwahpera is voiced by Augustin Chemelle.

After Mario, Beep-0, and co., under instructions from someone, unlock the Moon Gate in order to awaken a warrior named Tom Phan to help them, they realize that that person was actually Bowser Jr., who had hacked F.B's email account. Bowser Jr. then tells the group that Tom Phan is, or at least will be real, pulling out the "Relics of Goodness"; a Rabbid, a Boo Balloon, and a Gramophone and scaring Spawny into fusing them. As Relics combine to create Tom Phan, Bowser Jr. explains that Tom Phan really means Phantom, before flying off. Phantom then begins to sing a ballad about his hatred of Mario and desire to kill him and his friends before starting the battle. As the battle starts, Beep-0 tells the group that his sensors indicate that Phantom is immune to all attacks while in the spotlight and that they will need to take out the lights before trying to attack him. After taking out the lights and bringing down Phantom's health twice, he begins angrily singing about his hatred of Mario and desires to destroy him again, now summoning even more enemies and becoming even more powerful. After taking out the lights and taking down Phantom yet again, he falls on the stage and performs an overly dramatic death scene before finally dying.

Phantom is best described as being extremely vain, arrogant, overconfident, and egotistical. He constantly regards himself as being superior to Mario and his friends and believes that he will destroy them even when he is quite weak and vulnerable. Even during the heat of battle, Phantom still remains concerned about his appearance, often stating "How does my nose look?" During his second ballad, he questions why Mario and his friends aren't kneeling before because he is "the star" and later states that they are not worth his time. He also has a flair for dramatization, as shown by his defeat, and a passion for acting and music.

For reasons unknown, Phantom was also deeply hateful, loathsome, calculating, and jealous towards Mario and sings about his desire to kill him constantly. Throughout the entirety of both his ballads, Phantom openly insults and pokes fun at Mario, mocking his "plumb-shaped" weight, mustache, relationship with Princess Peach, and lack of dialogue. In one of his lyrics, he states that Mario has done him "a thousand wrongs ever since Donkey Kong", meaning that his hatred for Mario stems from his very first appearance in video games. 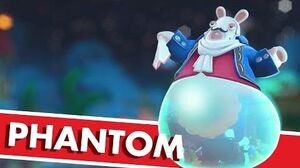 Retrieved from "https://villains.fandom.com/wiki/Phantom_of_the_Bwahpera?oldid=4214461"
Community content is available under CC-BY-SA unless otherwise noted.