Seti I
Pharaoh
Father (by Rameses and Moses)

Having the Hebrews enslaved.

Ruling over his kingdom.

Ensure that he stays in power (even if it meant the execution of thousands of innocent children; succeeded until his death).
Enslave the entire Hebrew people into working forever in Egypt to build his pyramids and the empire of Egypt and not let them escape (failed).

Pharaoh Seti I is the overarching antagonist of DreamWorks' second full-length animated feature film The Prince of Egypt (which is based on the Book of Exodus), due to his negative influence on Rameses and genocide against the Hebrews. He is the husband of Tuya, the father of Rameses, and the adoptive father of Moses (the protagonist of the film). Although he is not an active antagonist for much of the film, it was his actions that would cause much of what occurred in the story.

Pharaoh Seti I is initially seen to be a wise, clever, positive and empathetic ruler, but is shown to be quite ruthless, demanding, monotonous, argumentative and power-hungry. He was willing to have every Hebrew baby boy killed because they were "only slaves", though he admitted that he did it out of fear that the Hebrews might one day rise in numbers and power to start a rebellion that will threaten the dynasty.

However, despite his stern and cold behavior towards his fellow subjects, Seti genuinely loves and cares for his family, as he agreed to his wife's proposal to adopt Moses (but he never found out he was a Hebrew) and appointed Rameses as High Regent, despite being hard on him. He even tried to comfort Moses over his responsibility behind the massacre and enslaving all the Hebrews when their population increased, implying a sense of guilt for the killing of the Hebrew baby boys as he is clearly shown to have taken no sadistic enjoyment in what he did as his voice takes on a sad and somber tone when he reveals what he did as well as explaining why he did it as it implies he did it because he truly and genuinely believed the Hebrews were a threat to his rule and also truly and genuinely believed that he had no choice but to do it.

However, his words that the Hebrews were "only slaves" revealed that underneath his seemingly regretful and burdened demeanor was that of a tyrant who did not see the Hebrews as fellow human beings and nothing more than property to perform hard labor for the Egyptians, and other than that their lives were of no consequence to him.

Little is known of Pharaoh Seti or his reign before he committed the act that would immortalize him as a monster forever. Fearing that the enslaved Hebrews were growing too numerous and might rebel against him, he ordered a mass execution of all male infants born to the Hebrews, having his army invade Hebrew homes and kidnap the male infants from their terrified mothers and tossing them into the river Nile. That decision would haunt him for the rest of his life.

However, one Hebrew woman named Yocheved managed to sent her infant son adrift on the river Nile using a small basket to escape the massacre. After a perilous journey, the infant would reach the royal palace where Seti's wife Queen Tuya picked him up and took him under her wings. By that time, Seti and Tuya had already had a son named Rameses, and despite his previous aggression towards the Hebrews, Seti willingly agreed to Tuya's proposal to adopt the child and named him Moses (most likely being unaware of his true heritage).

Years later, Seti is shown to be a stern leader, even to his own sons - though he is especially harsh towards Rameses, due to him being the heir to the throne. However, he was also shown to have a softer side. He tried his best not to show it regardless. In Seti's defense, many rulers before him of that period did the same, being raised from birth to believe that they were incarnations of gods, particularly Osiris and his son Horus.

Later in the film, Seti appoints Rameses as Prince Regent (on the advice of Moses), placing him in charge of overseeing the construction of the temples. When Moses suggests that the priests Hotep and Huy offer a tribute to Rameses, Seti happily concurs and orders the priests to do so. The priests does so by giving a Midian woman named Tzipporah, but Rameses decides to give Tzipporah to Moses, who eventually sets her free.

Eventually, Moses discovered his true heritage after having a nightmare involving the massacre and exploring the royal palace, where he came across a depiction of the massacre, much to his horror. Upon seeing Moses grieving over this, a guilt-ridden Seti tries to comfort his adoptive son by explaining his reasons for the massacre. However, his seemingly uncaring attitude towards the "slaves" simply served to alienate him from Moses, who fled from his adoptive father - repulsed and disgusted by his attempts to justify infanticide.

Seti is not heard of again in the film, but died at some point following Moses' exile into the desert, passing his kingdom to a fully-grown Rameses - who would do all in his power to try and build a "better" Egypt than his father could ever have dreamed of.

In this stage adaptation of the film, Seti's role remains mostly the same with some exceptions.

In this adaptation as part of a political alliance, Seti betroths Ramses to a princess named Nefertari. It is also he, not Hotep and Hoy, who brings Tzipporah to the palace, whom he gives to Ramses to be his slave.

After Moses flees Egypt, Seti dies and is succeeded as Pharaoh by Ramses. 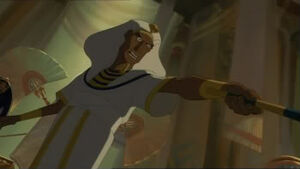 "But one weak link can break the chain of a mighty dynasty!" 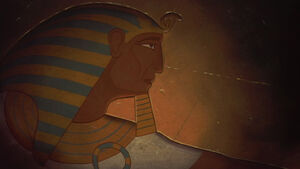 The hieroglyph of the younger Seti ordering his soldiers to slaughter the Hebrew babies. 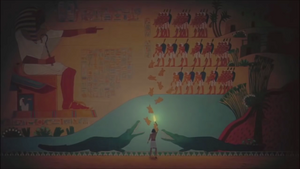 The entire hierogylph depicting Seti's slaughter of the Hebrew babies, much to Moses' distraught. 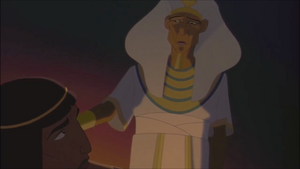 "The Hebrews grew too numerous. They might have risen against us." 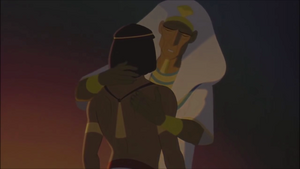 Seti attempting to comfort Moses with a hug (to no avail). 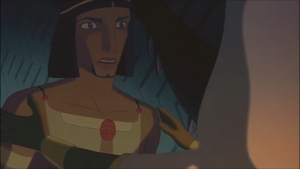 Moses backing away from Seti in horror of his attempt to justify his actions.