Use of Void Dragons
Superhuman durability

Cure himself from the Wyrmscale or at least master it

Aid Morsayati on his resurrection
Enslaving innocent dragons across the world.

Phares is the antagonist from the mobile game Dragalia Lost. The second scion of Emperor Aurelius, Phares is a seemingly laid back and polite person who was struck by a dangerous and severe illness known as "The Wyrmscale". Despite this, Phares branded himself as a scientist who viewed moral concepts of good and evil as rather meaningless and has no hesitations to break several ethical codes just to get what he wants and also allying himself with the leader of Dyrenell Empire, Morsayati who possessed the Ilian Auspex, Zethia, and the Dyrenell Empire itself because of their intertwined agenda.

He is voiced by Satoshi Hino, best known as voicing Takuto Maruki from Persona 5 and Ainz Ooal Gown from Overlord despite being uncredited by the game for now.

Phares is a man that can be described by having a slim build, with a shouldeer length curly blonde hair and green eyes. He wears a long, blue cloak over a terracotta-colored coat, and over a strip of black clothing covering his chest, arms, and legs. He also wears armor on his hands, and has a large patch of white scales on the lower right side of his face and part of his neck due to his Wyrmscale infection.

Phares himself can be described as a laid back and polite person towards other people who is afflicted with a tragic disease known as Wyrmscale. Best exemplified when he tried to save his own brother, Emile, from trouble in Chapter 7 and around Dragalia Life #59 where he cooked a beef by using his soldiers armor when the soldiers are uncomfortable moving in the heat during the summer. Phares is also seemingly cordial towards other people including his siblings and Euden himmself.

Despite his polite persona, Phares described himself as a scientist who tried to slake his curiosity and is rather unbound with morality itself, viewing the concept of good and evil rather meaningless. This is best exemplified as when Euden calls him out on siding with the Dyrenell Empire despite their tyrannical regime, Phares simply doesn't care and another example of him being unbounded with morals is that he has no hesitation on using his siblings or several dragons as a test subjects for his own experiments to further his own agenda and seemingly aiding Empress Zethia because of their agendas being intertwined together. Despite this, it is possibly implied that he did all of this to cure the rare disease he had suffered.

Ever since his birth, Phares suffered a rare yet dangerous disease known as the Wyrmscale, a disease that afflicts several of the people from the dragon bloodline because of their mana that were identical with the dragon which resulted on them gradually become much of a dragon. The Wyrmscale itself has a dangerous side effect as the afflicted will suffer a prolonged, horrible death as they grew older because of the human body unable to endure the transition of becoming a dragon. This resulted on Phares experiencing a nightmare about becoming a dragon countless of times.

As a result, Phares then began researching about the disease and enduring it until his adulthood. Despite the research he had conducted regarding the wyrmscales, Phares deemed the research of the wyrmscales to be childish and finding out that the frail human body is the main problem because no one questions whether the wyrmscale itself is a dangerous disease or not which resulted on Phares claiming that humanity won't be able to achieve several impossible feats as they resigned themselves to the first hurdle.

Phares first appeared around Chapter 7 as a mysterious person where he, alongside Harle and Empress Zethia, observed several things that Euden and his companions had done during Chapter 7. After one of his siblings, Emile, was cornered by the heroes, Phares makes his appearances in front of them and tried to save Emile from the heroes out of brotherly affection. When Euden asked Phares to join his side, he simply declined as he already joined the Dyrenell Empire as one of its generals.

It was soon revealed that Phares is responsible for the fiend attacks in the Aquapolis, St. Lotier, as he intentionally lured the fiends into a forbidden swamp known as Davian Wetlands for his own experiments to slake his scientific curiosity by seeing their reaction as they approach the ancient ruins located in there. This enraged one of Euden's companions, Ranzal, as he attempt to attack Phares with his axe. However, due to the wyrmscale disease he had suffered, Phares survived Ranzal's attack much to his disappointment.

Due to Phares's actions on luring the fiends into the Davian Wetlands, he accidentally revived an Ancient Weaponry much to Phares's amusement as he want to see the result. This resulted on the heroes attempting to stop the weaponry otherwise any living creature near the radius of said ancient weaponry will perish. After the heroes managed to defeat the ancient weapon, Euden then asked Phares about his true motivation which he responded by saying that he wanted to obtain the knowledge of the world itself while preferring neutrality. Before retreating with Emile, Phares simply warns Euden about a certain storm that had been brewing after the latter made a pact with several dragons and also tells him that not all storms will be unwelcome towards the heroes.

Returning again in Chapter 10, he was invited alongside Euden's other siblings by Empress Zethia and Harle to Clave Loy'elune, the largest binding ruin that seals Morsayati's main body. He accepts it because his agenda was intertwined with Empress Zethia's agenda. Meeting with the heroes, he then questions the accuracy about Alberius successfully sealing Morsayati as according to him, despite the concept of sealing Morsayati was inextricably linked with peace, it was connected with a gossamer of threads.

After watching the flashbacks about Alberius failing to seal Morsayati, Phares then stops Emile speaking further nonsense due to the latter's insults against Alberius. When Euden tells Phares about Dyrenell's tyrannical regime, Phares simply questions Euden whether the empire that will be ruled by Empress Zethia will be tyrannical or not due to the concepts of good and evil doesn't interest him that much. Because of this mindset, Phares then formed an alliance with Empress Zethia just to satisfy his own curiosity in the end of the day.

During the sibling meeting in one of the extra parts of Chapter 12, when his siblings, Leonidas and Chelle, both asked about his real motivations, he simply answers by saying that he only wanted to slake his own desires which were revolution, progress and even creation while also telling them that he will use Alberia's dark secret as a weapon much to Leonidas's horror.

Before going to the dungeon in order to awaken the dark secret of Alberia, Phares conduct several research about the wyrmscale due to the nightmare that he received as he dismissed it. Helped by the dungeon guard to release Alberia's darkest secret who was robbed of consciousness by an extremely powerful magic called witchhasp that was custom-crafted by the greatest practitioners in the land, said guard ended up getting murdered by the darkest secret itself which Phares responded it with callousness and Phares used Alberian's dark secret as a weapon to made Void Dragons, dragons who were corrupted by black mana.

After Euden manages to defeat Leonidas during the Battle of Rovetelle in Chapter 12, Phares makes his appearance with his void dragons and using both of his brothers as a test subject for his Void Dragons as he encourages the former to fight the latter. When Leonidas attempted to stop the Void Dragons, Phares knocks Leonidas easily which made him disappointed as he didn't gain any meaningful conclusions. Despite this, Phares also found out that Leonidas contributes to the improvement of the Void Dragons before retreating to Lake Reeve.

As the heroes and Ed entered the ancient structure, Phares reveals himself towards the heroes and tells them that the ancient structure in question is revealed to be a Mana Klin, a structure that produces artificial black manas by absorbing the natural ones. Because of this, Lake Reeve was polluted by the amount of black manas. In the meantime, Ed reveals himself as Phares's ally and is in fact, the long lost fifth Scion of Aurelius named Beren who was sealed from the public due to him being Alberia's greatest shame much to Euden's surprise. It was also revealed that Phares used Beren's powers to corrupt innocent dragons into Void Dragons.

As both Phares and Beren retreated to the inner chambers of the mana klin after it was completed, they then began to experimenting on the dragon that was captured by Empress Zethia which is revealed to be the guardian of Lake Reeve with the void powers produced by both Beren and the mana klin itself. Using the dragon to attack the heroes for their test subjects, both Phares and Beren were fortunately stopped by the White Sparrow Knight leader, Leif, thanks to Chelle's information.

After the heroes seemingly defeating the Void Dragon, Phares then summons another one as a backup plan as the mana klin starts to collapsed. Surviving the collapse, the heroes then found out countless of dragons that were subjected by Phares's void experiment as the two had the same agenda on enslaving every dragon in the world itself with the Black Voids. As the Void Dragons in the klin began to flight away outside, Phares and Beren then returns to Empress Zethia in order to report the results about the experiments that happened in the Mana Klin. 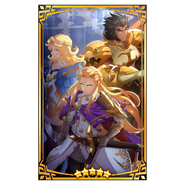 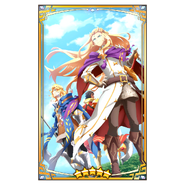 Leonidas, Phares, and Valyx in the refined "Dragon Brethren" wyrmprint.
Add a photo to this gallery

Retrieved from "https://villains.fandom.com/wiki/Phares?oldid=3897328"
Community content is available under CC-BY-SA unless otherwise noted.