The Thief and the Cobbler

Eat something (succeeded, as he ultimately eats Zigzag).

Phido (also called Phido the Vulture) is a supporting antagonist in the 1993 animated fantasy film The Thief and the Cobbler. He is a vulture who served as the pet to the evil wizard Zigzag.

In the Miramax version, he was voiced by Eric Bogosian. However, in the original version and Calvert versions, he was voiced by the late Donald Pleasence, who also played Ernst Stavro Blofeld in You Live Only Twice.

Phido appeared to be extremely dependable, steadfast and loyal to Zigzag as he seemingly tagged in the latter's plot to marry Princess Yum-Yum. However, it turns out that Phido actually hated Zigzag as the latter was so vituperative and abusive to him, and hardly ever fed him. As a result, Phido even snickered when King Mighty One-Eye attempted to have Zigzag fed to some alligators. He even took the opportunity to get some payback by helping the alligators devour Zigzag alive following the deaths of Mighty One-Eye and his dangerous army of One-Eyes.

Phido is a big black vulture with yellow eyes, a white beak with a red tip, gold feet, a gray belly, lavender eyelids, and a small red hat. His last scene in the movie implies that he has a strange ability to grow large mouth twice his size full of razor-sharp teeth

Throughout the film, Phido is abused and neglected by Zigzag, never being fed by the sorcerer and constantly having his rump set alight by the careless alight. ZigZag later allied himself with Mighty One-Eye and his army to take over the Golden City, also taming One-Eye's pit of Alligators by promising fine food. In the end following the deaths of King Mighty One-Eye and his men, ZigZag falls back into the gator pit trying to escape and now had to face the hungry gators, vengeful that ZigZag didn't keep his word. Phido is able to grasp his freedom by flying down into the pit as Alligators tear into ZigZag and start eating the wizard alive. As Zigzag looks at Phido, he remarks even his best friend as betrayed him as Phido finishes Zigzag by biting his head off. 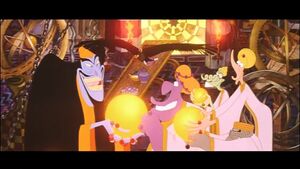 Phido arriving as Zigzag receives the golden balls from his sycophants. 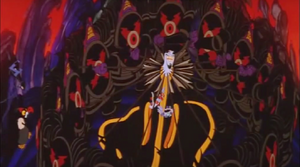 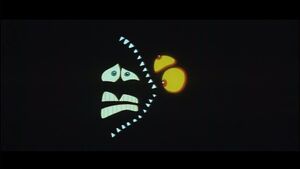