The Shah of Iran

He was portrayed by the late Frank Vincent, who also played Billy Batts in Goodfellas, Frank Marino in Casino, Salvatore Leone in the Grand Theft Auto video game series and Jon Gabagoolie in Mr. Pickles.

As a prominent capo of the Lupertazzi crime family Phil Leotardo served 20 years in prison and often mentions this as a testament to his loyalty to Costra Nostra.

When Phil got out of prison he rejoined the Lupertazzi family which was now under the leadership of Johnny Sack. Phil got into a financial dispute with DiMeo boss Tony Soprano, and when he tried to duck Tony, he was forced off the road, crashing his truck and injuring his neck enough to need a brace. Tony compensated Phi by having his car fixed free of charge at Angie Bonpenseiro's body shop. Phil took advantage or this and tried to wring as much work possible out of the deal.

Phil took Johnny's side in the power struggle against Little Carmine Lupertazzi. Phil, his younger brother Billy and Joey Peeps killed Carmine's ex and loan shark Lorraine Calluzzo when she refuses to redirect her payments from Carmine to John. Little Carmine then has a hit put out on Peeps which is carried out by Soprano's  cousin Tony Blundetto. In retaliation Phil and Billy murder Carmine's supporter Angelo Garepe. Blundetto is outraged as he and Angelo are close friends and kills Billy in revenge.

Soprano initially protected his cousin's location from Phil as he knew he wanted to torture him however after Phil attacked family associate Benny Fazio and put him into hospital, Soprano realizes he can't protect him forever and personally took his life to spare him from Phil's torture. Phil was outraged he had been robbed of his opportunity for revenge but was able to make peace with Tony for the time-being.

When Tony's top earner Vito Spatafore, who was also the husband of Phil's cousin Marie was outed as gay and fled into hiding, he wanted to find Vito so that he could kill him as he felt Vito had personally dishonored his family.

Phil visits to Marie in an effort to find out where Vito was hiding and lied saying that he only wanted to get him some therapy. Phil also harasses the indifferent Tony about his efforts to find Vito.

When Vito comes back out of hiding Phil, his men brutally beat him for death without Tony's permission, much to his outrage. Tony then arranged for Phil's room to be bombed. After an unsuccessful attempt by Little Carmine to make peace between the families, Phil's captain Butch Deconcini suggested he whacks Tony but Phil felt killing a boss would be wrong. Butch then suggests he kill someone close to Tony instead. When Phil suffered a heart attack he was visited by Tony who related to Phil the feelings of fear and regret that plagued him after his near-death experience and asking for peace in the interest of business. Tony's words seemed effective, even moving Phil to tears.

Phil wishes to step down and spend more time with his blood family, keeping with the sentiment offered to him by Tony and wanted his protégé Gerry Torciano to take over however after Torciano was killed on orders from Doc Santoro in a bid for power Phil blamed Gerry's death on his softness and fell back into his old ways, arranging Santoro's death both to avenge Gerry and fully confirm Phil's position as boss.

Phil refused Tony's offers of compromise on a removal project and was outraged when Tony attacked one of his men for harassing his daughter, ordering a hit on Tony, Silvio Dante and Bobby Baccalieri in revenge.

In the series finale, Butch decides the war is unprofitable and tells Tony he will not face any retaliation if he arranges a hit on Phil. Phil is then shot in the head by DiMeo soldier Walden Belfiore in front of his wife and grandchildren. 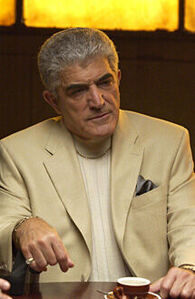 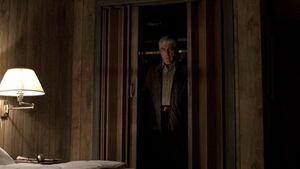 Phil coming out of the closet before Vito's murder.

Phil's demise at the hands of Walden Belfiore.