Trickery (as a human)

Supernatural fighting prowess (as a cenobite)

Revive Julia Cotton by feeding her his patients (succeeded).

Enter Hell and learn the truth about its mysteries (succeeded).
Conquer Hell for himself (failed).

Dr. Phillip Channard (often referred to as Dr. Channard) is a major antagonist in the Hellraiser series.

He was portrayed by Kenneth Cranham.

Channard ran an institute named after him. One of his patients, a teen Kirsty Cotton tells him about the Cenobites. Unbeknownst to Kirsty, Channard has the mattress on which Kristy's stepmother, Julia Cotton died. Kyle MacRae, Channard's assistant, witnesses him taking patients to be sacrificed in an effort to resurrect Julia.

Channard continues to feed Julia corpses as she gets close to a full resurrection. Kyle, now believing Kirsty, takes her to the house, where they see Julia, and Channard with another patient, Tiffany, a mute girl Kirsty had befriended. It turns out Tiffany isn't a sacrifice, but the one who is to open the Lament Configuration so Channard can experience hell. When Pinhead and the others are summoned, Pinhead decides not to kill Tiffany because it wasn't her desire. After Kirsty, regains consciousness after being previously knocked out by Julia, follows them into hell with the box.

In hell, Julia, who is sacrificing souls for Leviathan, betrays Channard and he is turned into a Cenobite-before doing so, the Leviathan scans Channard's mind, where it is revealed that he dissected animals when he was a boy.

Leviathan transforms Channard into a Cenobite, to whom It connects Itself via a tentacle. The new Channard Cenobite proceeds to hound Kirsty and Tiffany. As Kirsty and Tiffany flee from Channard, they run into Pinhead and his entourage. In an attempt to save herself and Tiffany from Pinhead, Kirsty hands Pinhead a picture of his former human self to remind him of his former humanity. Pinhead scoffs at the idea that he was once human. The female Cenobite proceeds to try to kill Kirsty, but Pinhead orders her to wait and tells Kirsty that he remembers being a human.

At this point, Channard emerges from behind and calls for Tiffany. Kirsty grabs her and shields her. Pinhead infers Channard's intentions and attempts to defend Kirsty and Tiffany. He hurls hooked chains at Channard, apparently to restrain him. Channard cuts the chains with his tentacles and frees himself. He then proceeds to kill off three of the Cenobites before transforming Pinhead back to his human form. Pinhead, as Elliot Spencer, looks at Kirsty and smiles. Kirsty and Tiffany flee. Spencer grabs one of his knives, apparently to defend himself, but before he can make a move one of Channard's tentacles slits Spencer's throat.

Back on Earth, it is discovered that Hell is beginning to crossover with Earth because Channard previously gave his patients their own Lament Configurations. Tiffany decides to close the puzzle box in Hell hoping it will stop Channard. Channard does attack, but Kristy begins to wear Julia's skin and distracts Channard by kissing him. The distraction was effective enough for Tiffany to close the puzzle box. Leviathan transforms into a larger scale puzzle box and begins losing souls at a rapid rate, as one of many results, Leviathan severs ties with Channard, tearing his head in half. Tiffany nearly falls in but is rescued by Kristy. 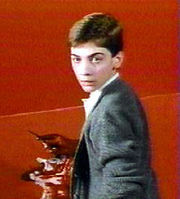 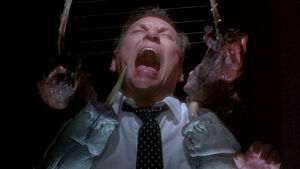 Channard is transformed into a Cenobite. 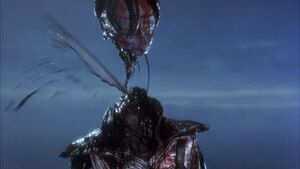