Be on good terms with Whiterose and protect E Corp at any costs (failed).

Fake Elliot's death in order to give him information to help him defeat Whiterose (succeeded).

Phillip Price is a major antagonist of the USA Network drama TV Show, Mr. Robot. He is the power-obsessed CEO of E Corp.

He is portrayed by Michael Cristofer.

After CEO Lester Moore of E Corp died in a plane crash, orchestrated by Whiterose because of interfering in her plans, Whiterose employed Price as the new CEO of E Corp. One of the main reasons why she did this was because she needed someone to look over her plant in Congo, which Price apparently was a good choice for because of his obsession and search for power.

As CEO of E Corp, Price can be held responsible for the corrupt acts E Corp has committed throughout the years. One example is the Washington Township scandal, an event where toxic waste started leaking out at a chemical plant owned by E Corp due to a lack of security. 26 employees died during the scandal, including Elliot Alderson and Angela Moss' parents. This lead to the two becoming vengeful and wanting to destroy E Corp, no matter how much damage it might cause.

Price doesn't do much this season, serving as a sort of enigmatic figure who's implied to have a lot of power. After Tyrell Wellick kills Sharon Knowles and becomes a person of interest to the police, Price decides to remove him from the list of candidates to become CTO of E Corp. When an employee of E Corp, James Plouffe, commits suicide, Price decides to go to Angela Moss and gives her the chance to go home due to witnessing Plouffe commit suicide. She was so near him that she got blood on her shoes, so Price gives her money to buy new shoes. In the final episode, Price and Whiterose meet at a celebration at a mansion full of rich people, and they discuss a project involving coltan mines in the Congo. Price says that it will be handled as usual and that she doesn't have to worry about it.

Price is having a speech regarding making the economical situation better again after the 5/9 hack by making E Coin the standard currency to judge all others. 19/20 countries have signed this, except for China who is using Bitcoin. He says that this might cause a currency war and that they should sign it, before finishing his speech. Whiterose, who is watching the speech, meets with Price after he's done. Price tries forcing Whiterose into getting China to sign, but Whiterose doesn't care and considers continuing the discussion a waste of time. Price then reminds Whiterose of the UN letting China annex Congo in 11 days, but that UN might now vote in China's favor, in which Whiterose responds by indirectly threatening to kill Angela.

Later in the season, Price and Whiterose meet at a party full of wealthy people. They talk about stage 2, a project which Whiterose and the Dark Army have been planning for a long time, which was recently carried out. The goals of Stage 2 turn out to be blowing up thousands of E Corp buildings in order to destroy the company as much as possible, and when Whiterose tells her motive to Price, "to teach a lesson", he calls her a sadistic f*ck.

In the final episode, Price has a meeting with Angela. He reveals to her that he is her biological father, but that her mother didn't want her daughter to be raised by a monster, so she left him. They talk about Angela participating in Stage 2 while having no idea what the true final goal of it was, and they agree on that they should take down Whiterose together.

This season starts where season 3 left off, with Angela and Price sitting together at a bench and talking. Price eventually leaves Angela by herself, but she is killed by Dark Army operatives as he is walking away. Price was fully aware that this was going to happen and has now had enough of Whiterose and is intending on taking the entire Dark Army down no matter what it can cost. At the end of the first episode, Price has some henchmen kidnap Elliot and make him overdose on heroin, only to revive him, essentially faking his death. The overdose is successful, and when Elliot wakes up, Price is standing above and welcomes him back. He is now intending on cooperating with Elliot and Mr. Robot.

Price looks over Elliot's board where he has written his conspiracies, and Price explains how Whiterose created a group named Deus in 1989 together with the wealthiest people in the world. He then explains that Whiterose had ordered him to kill Elliot, and he was going to kill him, but instead decided to fake his death so that he could get help with defeating Whiterose. Whiterose and Price then meet in a house. Price reveals to her that he is going to leave his position as CEO of E Corp and that she has to find a new CEO, which angers Whiterose, but Price quickly walks away. In the third episode, it's revealed that Whiterose is planning on making Tyrell Wellick the new CEO of E Corp. However, in episode four, Tyrell takes a bullet intended for Elliot leading to his death.

Arranging a meeting with Whiterose at a museum, Whiterose reveals that she is aware of Price and Elliot's collaboration. If he tells her about what their plans were, he will peacefully die in his sleep, if not then he'll die quickly. He doesn't reveal it. Whiterose then starts talking about how impressive Tyrell is in the Deus meeting and how everyone thinks he's a perfect CEO of E Corp, which Price is sceptical about as Tyrell isn't even at the meeting. Whiterose's assistant Wang Shu confirms this, which angers Whiterose. After a phone conversation between Mr. Robot and Whiterose, Price and Whiterose walk out of the museum. Price stops for a while and starts talking about Angela. How she lives on in those who loved her. Price then reveals that Elliot hacked the Deus Group's bank account, and is being overdrawn. This leads to all the money being lost, leaving Whiterose broke and all the money that she would finance her project with gone. Whiterose completely loses it because of this, grabbing a gun that one of her henchmen carried and shooting Price to death out of anger. Price dies knowing that Whiterose is going down, having truly avenged Angela.

Phillip Price may appear as egotistical and just a narcissistic god wannabe, but as his actor Michael Cristofer states, Price has inner loneliness that he is constantly trying to fill in with his power. Angela Moss is a kind of way of fulfilling it, especially as it is revealed in season 3 that Angela is, in fact, his biological daughter. Despite all of his power, wealth, and intelligence, Price is surprisingly nice to people and likes having conversations with people about certain things. But that said, Price is still egotistical and has low empathy, with Angela being one of the few people he cares for whatsoever. This is shown when one of his employees commits suicide and Angela happened to be nearby; he gives Angela new shoes to comfort her, but shows no sympathy for the suicide victim. 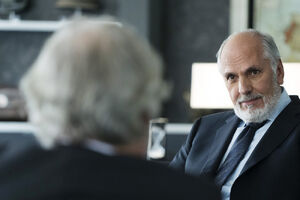 Price in season 1 with the current CTO Terry Colby. 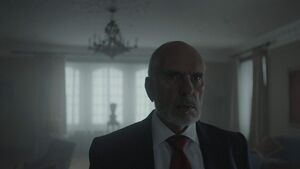 Price talking with Whiterose about E Coin and Bitcoin. 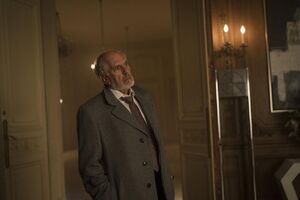 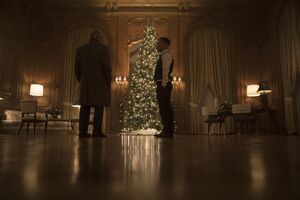 Price revealing to Whiterose that he wants to step down from his position as CEO.
Community content is available under CC-BY-SA unless otherwise noted.
Advertisement