NOTE: This article is about the incarnation of Tinkerer from the Marvel Cinematic film series. The mainstream version can be found here: Tinkerer.

Making profits from his work with Toomes (succeeded for a while).

Phineas Mason, known as the Tinkerer, is one of the two secondary antagonists (alongside Herman Schultz) of the 2017 Marvel film Spider-Man: Homecoming.

He is a technological mastermind and a member of Bestman Salvage. Mason is tinkering with the alien technology that his boss Adrian Toomes is providing to build futuristic weaponry which Toomes is then selling.

He was portrayed by Michael Chernus, who also played Arthur Ingram in The Bourne Legacy.

Schultz was part of Toomes Salvage Company. The company took clean-up after major superhero battles. After the Chitauri invaded New York and were beaten back by the Avengers, the company were employed to clean up the mess.

After the Department of Damage Control took over the cleanup jobs, basically costing Toomes and all his associates their jobs, Mason joined Toomes who decided that they would use the already salvaged Chitauri tech to create futuristic weaponry. Toomes, Mason and others turned to a life of crime, selling the weapons to low-life criminals. It was Mason's job to use his scientific experience to build weapons out of the alien tech. Mason also made plans for a highly luxurious heist involving the Avengers Tower but Toomes, who preferred their operations under the radar, never agreed.

After multiple of their operations have been foiled by Spider-Man and the team is at the edge of disbanding, Toomes eventually agrees to Mason's proposition and, to Mason's delight, orders Mason to build the equipment required for the "Big One". With Mason's equipment, Toomes is able to hijack the cargo plane carrying Avengers equipment upstate without being noticed. Although Mason's equipment works, the job is once again foiled by Spider-Man. Although his whole team is taken down, with Brice dead and Toomes and Schultz imprisoned, Mason seems to be still at large.

Mason cleaning up the Battle of New York. 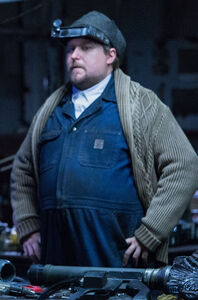 Mason experimenting with alien technology.
Add a photo to this gallery

Retrieved from "https://villains.fandom.com/wiki/Phineas_Mason?oldid=4045450"
Community content is available under CC-BY-SA unless otherwise noted.