Angela Hawkins III, also known as Phobia, is a supervillain in the Teen Titans media.

Born a member of the British aristocracy with the power to make people experience their worst fears, Angela Hawkins III was a "bad seed" who rejected any help from her family.

When the Brain came to London to recruit her for the reformation of the Brotherhood of Evil, Angela readily agrees. She joins the New Brotherhood of Evil in the hopes of conquering her own fears by unleashing those of others. Sometimes, man-hating tendencies rise up in her. Angela suffers from the fear of being alone. Since then, Phobia and the Brotherhood have opposed the Teen Titans on numerous occasions.

Phobia travels to New Zealand and in the course of murderous crimes, coincidentally encounters the beastial super-hero Tasmanian Devil. Sensing her killings, Tas and his New Zealand contact and confidante Raylene Mackenzie tail her. A fight ensues. Tas is initially immune to Phobia's powers, because his bestial nature is so near the surface. She digs deeper, uncovering his fears of his dominating and abusive mother. Tas relives a paticular incident where his father was degraded and hit. Raylene attempts to help and is hit with her own fear, drowning. Despite this, they manage to work together, subduing Phobia with blows to the head.

A later encounter with Raven makes Phobia confront the fears and insecurities that lay within herself which was stemming back to issues with her childhood and her father, Lord Hawkins. It appears Phobia might reform and abandon her criminal ways following this encounter.

Phobia later resurfaced back with the Brotherhood, now calling themselves the Society of Sin. She also accepts an invitation to join the Secret Society of Super Villains in Villains United #1, though those who do not accept such invitations tend to wind up dead. She is a new member of the Injustice League.

The exact origin of Phobia is unknown, nor is any of her past revealed. Phobia never appeared formally in the Teen Titans series, but she has made two cameos throughout the series. In "Homecoming Part 2", she is seen as one of the recruits for the Brotherhood of Evil. However, she has not appeared since, until "Titans Together". She was defeated by Robin and Cyborg's combination attack.

Phobia appeared in the final issue (#55) of the Teen Titans Go! comics. Phobia had managed to infiltrate Titans Tower and trapped all of the Teen Titans in their own nightmares, each nightmare consisting of their own worst fears. With the Titans subdued, Phobia proceeds to report her success to the Brain through a transmission, but Silkie manages to wake up the Titans by activating the emergency alarm in the tower. Phobia hastily puts them back to sleep again, but Cyborg reveals that he had just erected a firewall in his mind to keep Phobia from hypnotising him, and quickly dispatches her with a well-aimed blast from his sonic cannon. However, Phobia disappears from the Tower before the Titans can find her. 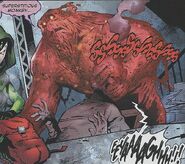