Experimenting with the Nexus.

Merge with the Other Place/Hell to become a god (both failed).

He is the corrupt head of Project Nexus, and a narcissist with a god complex. His main weapon is the Binary Sword, which was later carried around by Dr. Christoff after his death.

Phobos first appears in level [1.5-D], wielding only his binary sword and confronting Dr. Christoff when he discovers he has defected from Project Nexus. Using the binary sword, he can deflect almost every bullet fired at him and knock out any melee weapons used against him. However, once he is successfully hit by an attack, he will flee the room and tell Dr. Christoff that they will meet again.

He doesn't reappear until the final level, where he resides in the last room armed with the binary sword and a TMP. While wielding the binary sword, he uses it to block attacks. When he is using the TMP, he dodges attacks by performing very high back flips or utilizing his TAC-Bar. Despite his evasive skills, he is still vulnerable to Nexus bolts and cannot block them with his sword. Once he is killed, Jesus will say to him, "Goodnight, Phobos".

A statue of Phobos in a powerful stance is seen, raising his binary sword into the air. He also sent a message to the Sheriff mentioning Dr. Hofnarr.

Phobos makes his return in the last level of the game, "The Rush", as one of the final enemies in the entire game. He controls a resurrected Mag Agent: Gestalt to fight Hank, Jesus/Christoff, Sanford, and Deimos. After the chase is over, and Gestalt is defeated, Phobos is released from Hell/the Other Place and attacks the protagonists himself. The player must destroy "Corpus Bars" to damage him, to which he will teleport out of the arena and summon souls from the underworld to attack the protagonists. During his first phase, Phobos will teleport around to player to attack, during his second and third phases, he will throw debris at the player, summon souls, use a sword to attack the player, and discharge anyone too close to him. After losing his fourth Corpus, Phobos will steal Jesus/Christoff's halo for himself, and become more powerful than ever, repeating his previous phase at a faster rate. After losing his sixth and final Corpus, Jesus/Christoff attempts to banish him back to the Other Place, only for Phobos to rebuttal that he will merge himself, Gestalt, and the Other Place together and become a god, and then possesses Gestalt. After being defeated yet again by the protagonists, they proceed to use C-4 and their ammunition to destroy Phobos and Gestalt once and for all. 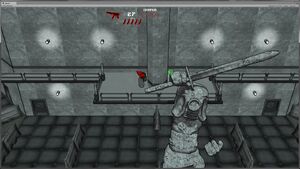